Has anyone noticed that the REG procedure in SAS/STAT 12.1 produces heat maps instead of scatter plots for fit plots and residual plots when the regression involves more than 5,000 observations? I wasn't aware of the change until a colleague informed me, although the change is discussed in the "Details" section of the PROC REG documentation for SAS/STAT 12.1.

Here is how the fit plot looks for fewer than 5,000 observations: 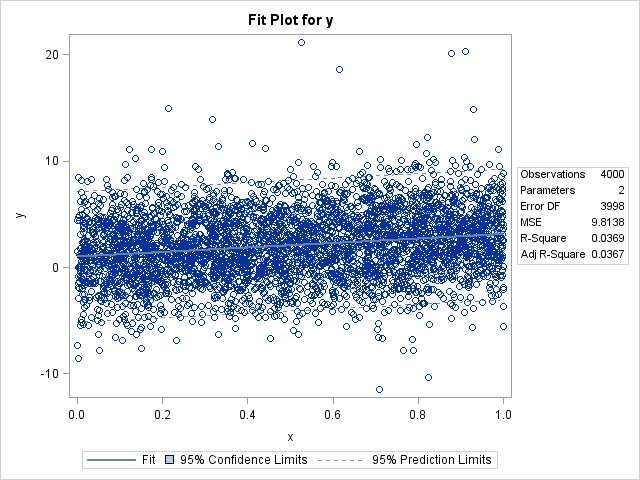 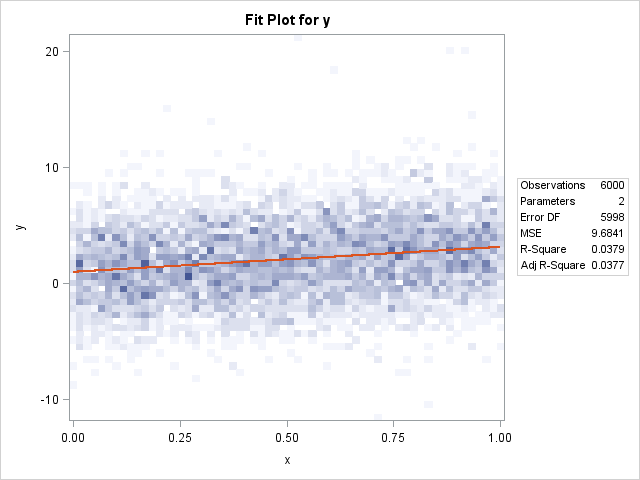 The scatter plot is gone, replaced by a heat map that shows the density of the data. The predicted values are still present, although the graphical style used to draw it is different, which results in a red line. The confidence intervals are gone.

The plot does not currently include confidence intervals, but there is no reason why these can't be added in a future release. However, the confidence interval for the mean predictions will usually be tiny for large data sets—already it is barely visible in the plot of 4,000 points.

Controlling the appearance of the heat map

Prior to SAS/STAT 12.1, the REG procedure created a fit plot as a scatter plot for small data sets (less than 5,000 points). For larger sample sizes, the procedure suppressed the fit plot. The behavior was controlled by using MAXPOINTS= option on the PLOTS= option on the PROC REG statement.

Any comments on this new behavior in PROC REG?