I was recently asked how to compute the difference between two density estimates in SAS. The person who asked the question sent me a link to a paper from The Review of Economics and Statistics that contains several examples of this technique (for example, see Figure 3 on p. 16 and Figure 4 on p. 17). The author of the paper uses the technique to demonstrate that the wage of a Mexican citizen influences his decision to emigrate to the US. Briefly, the paper plots a kernel density estimate of the income distribution of Mexicans who emigrated and those who did not, and shows that the incomes of those who decided to emigrate tend to be less than for those who decided to stay.

In SAS, you can form the difference between two density estimates by doing the following:

However, just because you can do something doesn't mean that you should do it! After I produce some graphs, I present some questions about the technique.

The difference of densities for subpopulations

The following DATA step creates two MPG variables. The call to PROC KDE overlays both densities on a single plot and writes the kernel density estimates to the KerOut data set. 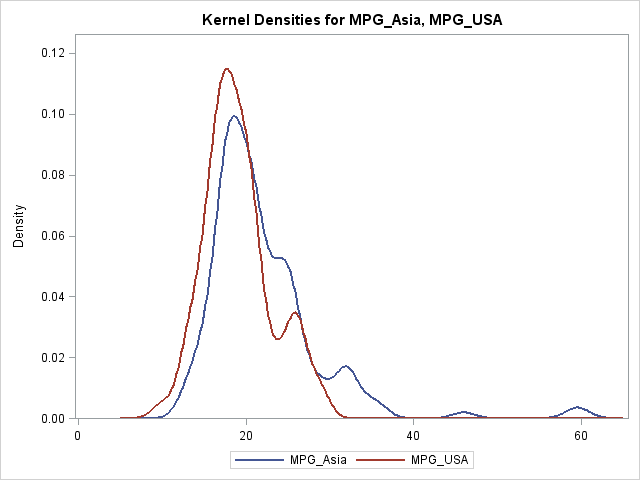 However, because we used the GRIDL= and GRIDU= options, no interpolation is necessary. You can just use the DATA step to merge the two KDEs and to compute the difference: 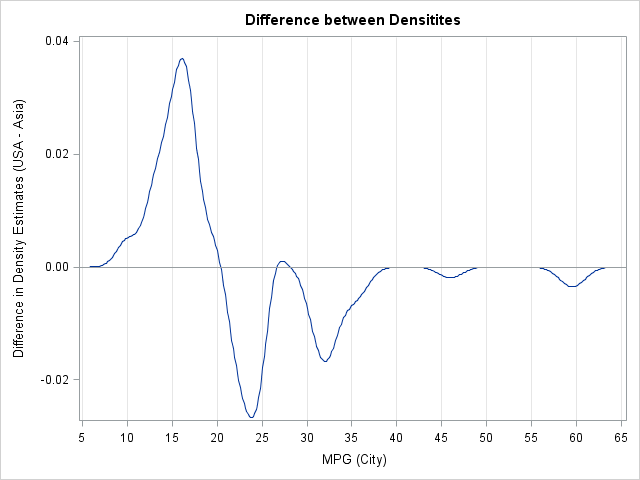 You can interpret the graph as follows. Given that a vehicle was made in the USA, its fuel efficiency is generally less than for vehicles that were manufactured in Asia. The "difference plot" shows the extent of the difference in densities for the two subpopulations. This plot is interesting because American cars that get approximately 27 mpg seem to be an exception to the general rule.

A critique of this method

I have never seen this "difference in density" technique before, and I have some questions about it. I am not familiar with a theoretical reference, so my criticisms are based on ignorance rather than on a careful study of the method.

One concern I have is that the scale of the "density difference plot" is clearly important, but the method seems to ignore it. Suppose that I have two normal populations, N(0, 1) and N(ε, 1). When I compute the difference in densities, the difference plot will look like the following plot. 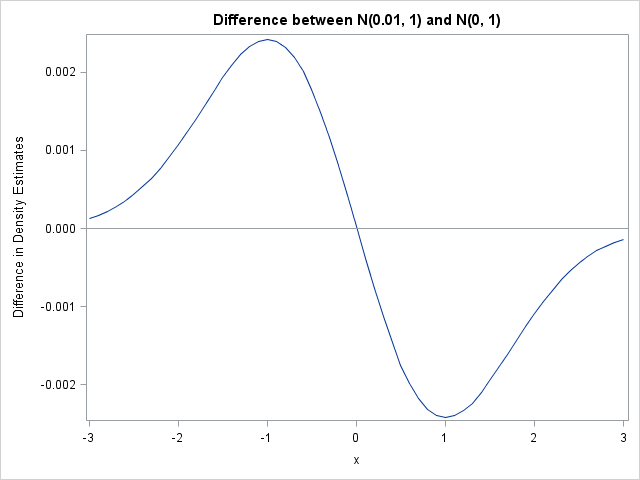 The authors of the paper acknowledge some of these concerns (p. 17 and the bottom of p. 16), and they perform a nonparametric test, such as can be computed by using PROC NPAR1WAY. Nevertheless, I wonder when it makes sense to display the difference between two densities.