Last week I showed a graph of the number of US births for each day in 2002, which shows a strong day-of-the-week effect. The graph also shows that the number of births on a given day is affected by US holidays. This blog post looks closer at the holiday effect. I actually conducted this analysis in 2009 for my book, but decided not to include it.

I want to identify days in 2002 that have fewer births than would be expected, given the day of the week. A box plot is often used for this sort of exploratory data analysis. The following statements use the VBOX statement in the SGPLOT procedure to create a box plot for each day of the week and to label the outliers for each day: 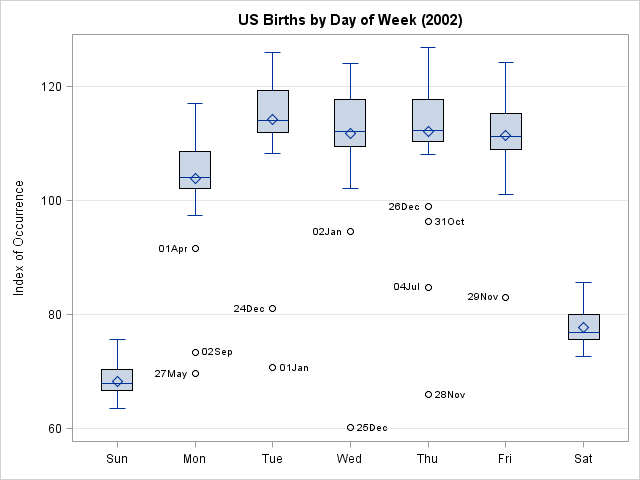 In the box plots (click to enlarge), the outliers for each day of the week are labeled by using values of the Date variable. Each date belongs to one of the following categories: US holidays, days near holidays, and inauspicious days.

Several US holidays in 2002 are responsible for lower than expected births, given the day of the week:

Christmas Day is the day on which the fewest babies were born.

Families often travel on days near holidays, and that includes doctors and other hospital staff. Several of these days are visible as outliers in the birth data.

Friday, 03JUL (the day prior to Independence Day), also exhibits smaller-than-expected births, as seen in the time series graph.

The following dates are also outliers:

Most parents don't want their child to be teased for being an "April Fool" all his life. It is less clear why a couple would avoid giving birth on Halloween. Superstition? Maybe. Or maybe doctors don't induce deliveries on Halloween so that they can be home for trick-or-treating?

These days might not be preferred for giving birth, but these are both blog-able holidays: I've written Halloween posts and April Fool posts.

Interestingly, for leap years, 29FEB also falls into the "inauspicious day" category. I guess parents avoid that date because the poor child would only get birthday parties every four years? Personally, I think it would be fun to be born on a leap day. And think how impressed people would be when I brag that I completed college before I celebrated my eighth birthday!