My friend Chris posted an analysis of the distribution of birthdays for 236 of his Facebook friends. He noted that more of his friends have birthdays in April than in September. The numbers were 28 for April, but only 25 for September. As I reported in my post on "the most likely birthday in the US," September is supposedly the king of birthday months, as judged by the analysis of birth records at the National Center for Health Statistics (NCHS) (Martin, et al., 2006).

Does Chris's analysis prove that the government researchers are wrong? Has he exposed a sinister government conspiracy? No, but I'd like to use his analysis to discuss two essential principles of statistics:

I could also discuss a third principal, the distinction between "different" and "significantly different," but I'll leave that discussion for another time.

What is the population?

The NCHS report was about birth rates for children born in the US in the late 1990s and early 2000s. Unless Chris's Facebook friends are tweeners and teenagers (insert inappropriate joke here), I think we can assume that Chris's sample is from a different population than the population in the report by Martin, et al.

A more likely explanation is probably plain ol' sampling variation. It is well known that small samples have more variability than larger samples. If I select at random 10 children born in 2002, I might end up with two children born in April and none born in September. Chris has 236 friends who share their birthday information. With a sample this large, you can get a distribution of birthdays that is probably close to the distribution of birthdays in the population, but you still might get a few more April birthdays than expected, given the population distribution.

An analysis of birthdays at a large US software company

One way to deal with sampling variation is to use a larger sample. It might be a while before Chris has thousands of Facebook friends, and I don't want to wait, so I'll use the birthdays of 3,061 employees who work at a major US-based software company. I wrote a SAS program to collate the birthday information. The following statements use the FREQ procedure to analyze and plot the distribution of birthdays by month: 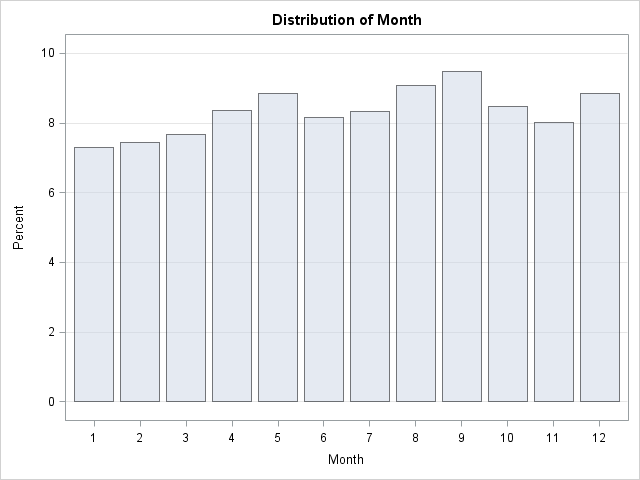 The image shows that September birthdays occur most frequently in the sample of 3,061 employees, but it also shows an apparent "bump" in the April–May. The difference between these peak months is small, about 1%, so a random sample with, say, 263 observations can easily contain more spring birthdays than autumn birthdays.

With more work, you can analyze the birthdays by week and fit a periodic smoother to the weekly frequencies of birthdays. This is shown in the following graph: 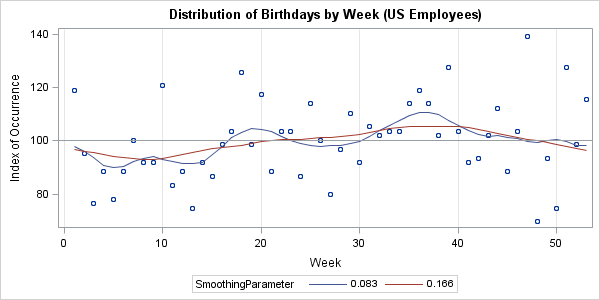 The two curves smooth the scatter plot based on a local weighted fit of 12 (blue-gray) or six (red) nearest neighbors. The red curve shows an annual seasonality of fewer births in the winter and more in the late summer and early fall. The blue-gray curve shows that the data might have a smaller cycle with a minor peak near weeks 18–20, in addition to the major peak near weeks 36–38. Both of these curves are consistent with the NCHS report, although the data are not drawn from the same population.

Notice the variability from week to week in this graph. Even with a sample of 3,061, the proportion of birthdays per week varies by ±30%, whereas the 4 million birth records from 2002 show a much smaller week-to-week-variability. For the 2002 data, it was easy to "eyeball" a curve that fit the data. For the birthdays of employees, I would be hard-pressed to predict what a smoothing curve might look like.

If anyone else wants to analyze the 3,061 birthdays, you can download the data as a set of comma-separated values.