Last week I showed how to create a funnel plot in SAS. A funnel plot enables you to compare the mean values (or rates, or proportions) of many groups to some other value. The group means are often compared to the overall mean, but they could also be compared to a value that is mandated by a regulatory agency.

A colleague at SAS mentioned that several SAS procedures automatically produce statistical graphs that are similar to the funnel plot. This blog post compares the funnel plot to the output from these procedures. Because my original post used a continuous response, I will concentrate on the analysis of means plots.

The main idea of Spiegelhalter's paper on funnel plots is to create a scatter plot that has control limits "in close analogy to standard Shewhart charts." (Spiegelhalter 2004, p. 1185). It therefore makes sense to compare funnel plots with a plot created by the ANOM procedure in SAS/QC software. This article also examines output from the GLM procedure in SAS/STAT software. (You can use other SAS procedures, such as LOGISTIC, GENMOD, and GLIMMIX, to create funnel-like plots for proportions.)

The example used here is the same as for the previous article: Clark Andersen's data on the temperature of car roofs on a 71 degree (F) day. 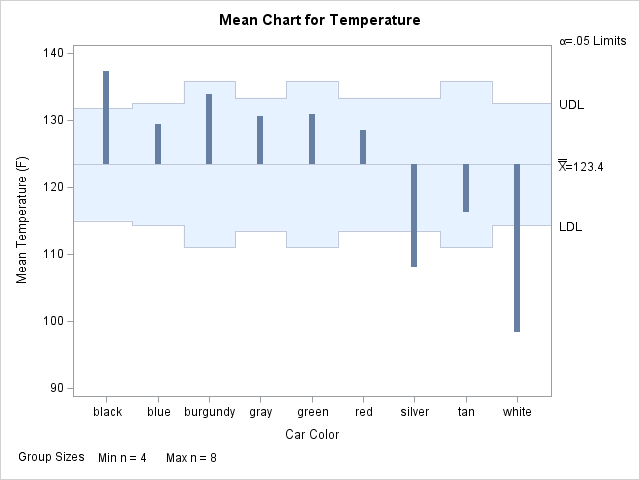 The information displayed in ANOM chart (at left; click to enlarge) is similar to the funnel plot in that they both show deviation from the overall mean. (See the documentation for the XCHART statement in PROC ANOM.) 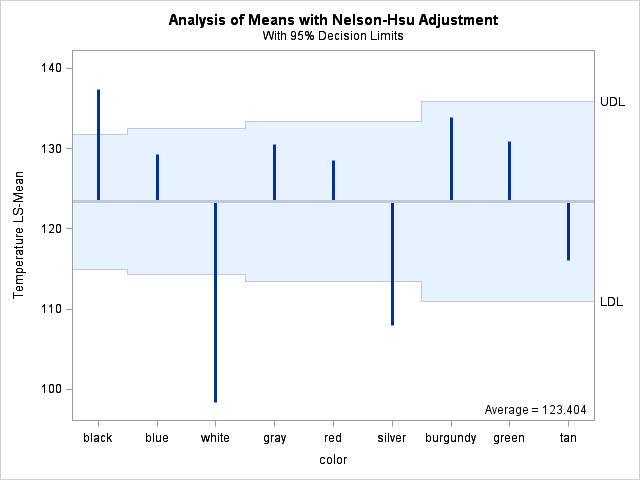 This plot is almost equivalent to the funnel plot. The main differences are that the groups are shown in decreasing order (instead of increasing) and the X axis does not explicitly show the sample size. For small examples such as the current data, this is not an issue, since there is room for all nine categories. However, the funnel plot easily handles hundreds or thousands of categories, whereas the ANOM plot would be unable to handle such a crowded axis.

For a small number of groups, the ANOM and GLM procedures can automatically produce funnel-like plots. They also automatically adjust the decision limits to account for multiple comparisons.

The funnel plot is a useful display for comparing the mean scores of hundreds of groups, and it explicitly shows the sample size, which is a source of variability. A drawback of the funnel plot is that you need to compute the control limits yourself, including (preferably) adjusting the limits for multiple comparisons. Next week I'll show how to compute these adjusted limits.