Last week I presented the GSR algorithm, a statistical model of a riffle shuffle. In the model, a deck of n cards is split into two parts according to the binomial distribution. Each piece has roughly n/2 cards. Then cards are dropped from the two stacks according to the number of cards remaining in each stack. I lamented at the end of the post that the algorithm is not easily vectorized because the probabilities of cards falling from the left and right stack change during the riffle. 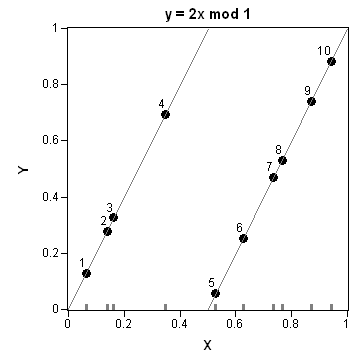 This algorithm is easily implemented as a SAS/IML function. The RANDGEN subroutine is used to generate random numbers from the uniform distribution. The SORT and SORTNDX subroutines are used sort the points and to rearrange the cards in the deck according to the "2x mod 1" transformation. (See a previous blog post for more information on sorting.)

You can test the algorithm by starting with a deck of cards in a known order and observing how the cards are mixed by consecutive riffle shuffles. The following statements riffle the cards seven times and store the results of each shuffle. To save space, a 20-card deck is used. The original order of the cards is denoted 1, 2, 3, ..., 20.

Timing the performance of the two GSR algorithms indicates that the geometric RiffleShuffle algorithm is about six times faster than the original implementation. Consequently, if you intend to simulate how cards are mixed during shuffling, use this algorithm instead of the initial straightforward implementation of the GSR model.