I was on vacation when a family member sidled up to me.

I knew I was in trouble.

He proceeded to tell me the story of Joseph "Newsboy" Moriarty, a New Jersey mobster who rose to prominence and became known as the bookie who did not welsh. It seems that "Newsboy" was one of many bookies involved in the numbers racket, an illegal lottery in which bettors pick three numbers and win money if those numbers appear (in a carefully prescribed manner) in the published receipts at a certain race track.

The story is that on September 16, 1958, a tragic train crash in New Jersey was the headline story in area newspapers. Supposedly, the front-page photo showed a car dangling from a bridge, and the photo clearly showed the train number as No. 932. (Sadly, I am unable to see the numbers in the scanned images.) This led many people to play those three numbers in the numbers racket and, amazingly, those numbers were the next-day's winners! Many bookies were unable to cover their bets and had to skip town, but Newsboy Moriarty honored his bets, and gained prestige and future business by doing so.

I knew what was coming next, but I waited for it.

"So, how do you explain that coincidence?" I was asked.

The laws of coincidence

Fortunately, coincidence has been explained by smarter people than me, so I was able to pass on a few of the explanations that I've read over the years. Two excellent sources are the Understanding Uncertainty blog by David Spiegelhalter and David Hand's keynote address to COMPSTAT 2010, entitled "The Laws of Coincidence." (Unfortunately, I cannot locate a free electronic version.)

Professor Hand introduces eight "laws of coincidence" which explain seemingly impossible coincidences. In the case of the New Jersey train crash, two of his laws apply: the "law of truly large numbers" and the "law of search."

The law of truly large numbers

The numbers racket was played in all large cities, which often had multiple daily papers. Each of those newspapers prints multiple articles, headlines, and photographs that occasionally feature a three-digit number. Each of those numbers is a potential match to the winning numbers of the daily numbers game. And this situation repeats day after day after day. Eventually some city is going to have some newspaper that prints some article that features some number that matches the winning digits of the numbers lottery in that city.

Don't believe me? Here's a SAS program that plots the probability of a coincidence in 50 cities during a 365 day period. I assume that each city has two newspapers and the probability of a newspaper printing a three-digit number on the front page is 0.05. If you don't like the parameters that I've chosen, rerun the program with your own set of parameters. 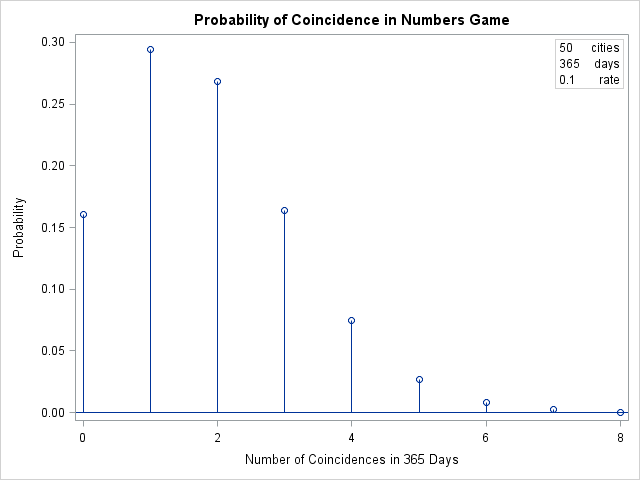 The graph indicates that we should expect some paper in some city to print some number that corresponds to the winning number in the "numbers game." There is only a 16% chance of this event not happening in the course of a year.

The law of search

Hand's law of search says that when the "search space" is large or unlimited, you will always be able to find a coincidence. Numbers are found virtually everywhere and can arise in a wide variety of stories that appear on the front page. An unscientific survey of headlines in the Washington Post on January 19, 2012, revealed the following numbers:

Addresses, dollars, counts...we are a society obsessed with numbers. They appear in papers, on TV, and on signs. I suspect that two-digit numbers appear more often than three-digit numbers, but a person who plays 1-2-9 in the numbers game after reading the first two headlines could shout "coincidence!" if they are a winner.

People often find patterns after an event occurs and then claim it is a coincidence. For example, there are a number of so-called coincidences concerning the destruction of the World Trade Center, including the fact that the twin towers look like the number "11" in profile and that they were destroyed on 9-11. There are coincidences between the assassinations of Abraham Lincoln and John F. Kennedy such as "the names Lincoln and Kennedy both have seven letters" and "both were concerned with civil rights." Another of Hand's laws says that if you look for patterns, you will find them.

Almost everyone has heard of an "amazing" coincidence, such as a lottery in which the same set of winning numbers are drawn twice in a single month. A new Web site by David Spiegelhalter called the Cambridge Coincidences Collection invites all readers to submit their strangest coincidence. I assume that in the future Professor Spiegelhalter will use some of these stories to illustrate why some of these seemingly impossible coincidences are actually not so surprising at all!