Since this is a blog about statistical programming and analysis, I am always looking for data to analyze. As 2011 ends, I look back on the 165 blog entries that I published since 01JAN2011. This article presents the 10 most popular posts, as determined by the number of people who viewed each entry. (When totaling the counts, I excluded readers from the sas.com domain.)

Posts that were published earlier in the year have a greater chance of appearing on the list. However, I did not normalize the data by the length of time since the article first appeared. Here, then, are the most-viewed articles of 2011:

The following chart shows the popularity of each post, relative to the average post was. (The average is represented by the reference line at 1.) You can see that the first few entries were read more than twice as much as my average post. The #10 post was read about 1.3 times more than the average. 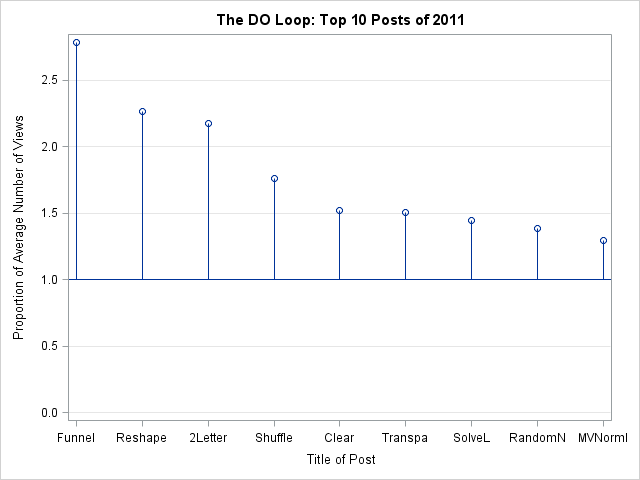 I think these posts are representative of my blog: an eclectic mix of data analysis, simulation, statistical programming, and tips on how to use SAS efficiently.

Readers, which posts did you find the most interesting or the most useful? What topics would you like to see more of in the coming year? Post a comment.