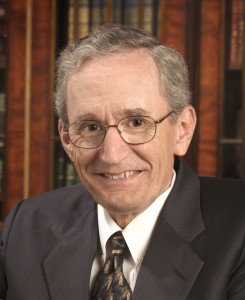 Love them or hate them, value-added models (VAMs) have changed the way we look at education today. VAMs have reshaped our thinking about the effectiveness of programs, schools, educators and colleges that prepare them. While VAMs have been used in the social sciences for decades, we can credit a few influential statisticians for refining them for education; one being Dr. William “Bill” Sanders.

His body of work emerged out of the University of Tennessee Knoxville in the early 1980s before bringing his team to SAS in 2000. On June 30, Dr. Sanders will be awarded the prestigious James Bryant Conant Award by the Education Commission of the States. I’d like to further honor Bill’s work with commentary from old friends, education researchers, and practitioners who appreciate the trail he blazed.

“I learned an awful lot from Bill Sanders. He and I often presented at the same meetings. I sat through his presentations; he sat through mine. And over time, mine began incorporating more and more of his findings. His research was a chance to demonstrate how big a difference teachers make in the lives of children. But his data also allowed us to show that low-income children and children of color not only got more inexperienced and out-of-field teachers, but also more of the least effective teachers. In those years, before value-added approaches were used in teacher evaluation, I found both principals and teachers deeply interested in what his research taught us.

One, that there were big differences among teachers in the learning growth produced during an academic year. And two, that those differences were not fully explained by the characteristics of the students.

Many teachers saw that as evidence that what they did mattered, and that there were important differences in their patterns, with some teachers much more effective with high achieving students, and others more effective with low achieving students. That made sense to teachers, as well as to principals. It feels like a real loss that these insights get less attention these days. Hopefully, that won’t be a permanent loss.”

“Back in the early 2000’s, I was talking with Dr. Bill Sanders and his wife, Dr. June Rivers, about challenges from those who are ‘less than positive’ about VAMs. Dr. Sanders made this powerful statement to me, ‘It is easy to be the movie critic; it is hard to be the movie maker.’ He was so spot on with this statement! People can always criticize something, but it takes a whole other level to be the person who is creating and developing something meaningful and powerful. That statement gets at the essence of Dr. Bill Sanders – he has been the movie maker of value-added! He built the foundation for looking at the effectiveness of districts, school and teachers.”

“Dr. Bill Sanders’ work has been instrumental in allowing states, districts, and campuses to determine the growth that their students are making annually. The instructional practices and work being done every day in the schools and districts using EVAAS where I have worked have changed from focusing on just getting the ‘bubble kids’ to pass, to focusing on the academic growth of every child every day. While Bill clearly deserves the James Bryant Conant Award, he would have also received the Nobel Prize had he not spent so much time mistreating me and others on the golf course!”

“Tennessee has the best student growth model and the most historical student data in the country thanks to Bill Sanders. [TVAAS] has lead Tennessee educators to become leaders in the use of student performance data. Additionally, as educators have developed an understanding of this growth model, they have been able to drill into the data to see how to improve achievement for each individual student.”

“Bill Sanders remains one of the most influential people ever in education. His work changed the conversation. Without him, student growth would not have been discussed in formative ways. For me, he leveled the playing field by showing student academic growth mattered and that it can be measured fairly, not perfectly. He brought hope to countless teachers who took kids from where they found them to higher ground regardless of their starting point. He brought evidence that teachers, principals, and schools mattered for kids. Battelle for Kids began with the philosophy espoused by Bill Sanders. While Bill is a world class statistician, what is sometimes forgotten is that he was also a world class teacher. To take complex ideas and explain them in ways that can be simply understood is real brilliance. I sat through countless presentations as he explained, clarified, demonstrated and patiently made numbers relevant to school improvement. He is most deserving of this recognition.”

“On a number of occasions I have had the pleasure of hearing Bill describe value added. His ability to explain complex ideas in readily graspable ways to diverse audiences was simply amazing. Bill played a significant role in helping to move the national focus from measures of teacher inputs (i.e. degrees, certificates, etc.) to measures of their effectiveness in the classroom, an incredibly important contribution."

I’m proud to be part of the team that carries on Dr. Sanders’ work, which has positively impacted the lives of many students across America. If you also know Bill, please share a story or quote below to congratulate him on a life of innovation and service.