In previous versions of SAS, if you wanted to experiment with creating U.S. maps in Proc GMAP, there wasn't any good sample data available.  Unless you had your own data available, you probably ended up using the maps.us x/y points as your DATA= ... which is sort of a nonsense thing to plot on a map.

Now, in SAS 9.4 we ship a rich data set containing over 80 variables about the U.S. population!

This makes it very easy & convenient to experiment with plotting different variables on a map.  The following example shows how to plot the population density for year 2010: 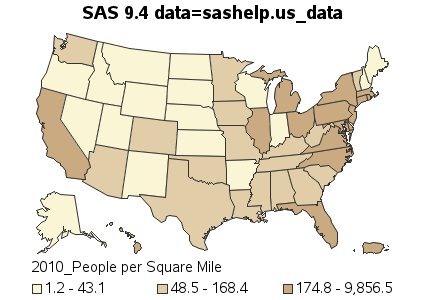 It also contains variables for the following values:

And, of course, you aren't limited to using this data just in Gmap -- you can use it in the other SAS/GRAPH procs, analytic procs, etc.