A standard joke among venture capitalists is that often the only well-developed section of the many business proposals they receive is the exit strategy.  “We’re going to be acquired for $10-20 million by a Fortune 500 company within 6-8 years.”  Exactly how they are going to achieve that $10M valuation is, however, often a bit sketchy to say the least, with a lot riding on a vaguely defined expansion into emerging markets once they’ve finished granting exclusive distribution rights in the domestic sphere.

I wrote about exits strategies at the product level in this post from last year, “Know when to hold ‘em, Know when to fold ‘em”, where I covered in some detail the issues of:

The ability to avoid hanging on to a declining product past its sell-by date depends largely on up-front planning and risk management that identifies trigger points and actions with the same rigor and discipline with which the initial investment decision was made.

But for this post I want to get above the product level and into the strategic realm of business models that in today’s rapidly changing economy can become as obsolete as any product. 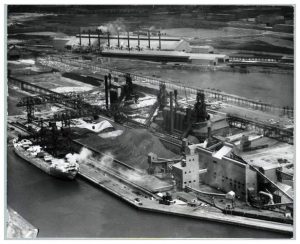 A discussion I had last week with a journalist about analytics in the metals and mining industries brought personal memories flooding back, memories of my father’s 26 years at U. S. Steel’s Fairless Works on the Delaware River just south of Trenton, New Jersey (undated photo on right); 26 years that might have been 40 had the entire industry not collapsed in this country.

I remember the business articles of the 1970’s and 80’s discussing America’s economic nemesis of the time, Japan’s steel and auto industry.  Japan – a mountainous country that owes its existence to the Eurasian-Pacific plate subduction zone on which it rests – has little iron or coal of its own to speak of.  And yet against all odds it became an export powerhouse in these markets.

Consider the absurdity of the situation.  Japan had to import nearly all of its coal and iron ore from the U.S. and Canada, ship it across the Pacific Ocean, process it, turn it into automobiles, and then ship it back, and still manage to sell cars well below standard American prices at the time.  How could this have even been possible?

The basic oxygen furnace is a technology invented in 1948 and commercialized in the early 50’s.  It can produce a 350 ton charge of steel in under an hour, compared with eight to twelve hours for a comparable ‘heat’ from the already established open hearth technology.  Rebuilding following the war, Japan was quick to adopt this new technology in the late 1950’s.

The big American steel manufacturers, U.S. and Bethlehem Steel, however, faced an economic conundrum.  Most of America’s steel-making capacity was put in place during the war, all of it open hearth, basic oxygen not coming on the scene until after the war.  The problem the U.S. faced after the war was excess capacity (no further need for massive quantities of steel for tanks and shipbuilding) and excess labor, with 12 million soldiers returning home from the Atlantic and Pacific theaters.  Pent up demand did significantly stimulate the post-war economy, but one thing the country most definitely did not need was additional steel-making capacity.

So the United States was quite late to the basic oxygen game.  Why would a steel executive in his right mind choose to scrap and replace already paid for, perfectly good open hearth furnaces, with an operational life of at least 40-50 years, after just ten years, with new capital investment?  More money for even more excess capacity?  You’d be nuts to do it, right?

But as it turned out, it was nuts not to. It was like the fable of the boiling frog - too comfortable in the slowly warming water to bother to jump out until it was too late.  Likewise, the competitive impact of basic oxygen was initially barely perceptible, yet ultimately fatal.  When U.S. Steel finally closed the hot end of Fairless Works in 1991 and laid my father off, it still operated with the same nine open hearth furnaces that it had started with.  It wasn’t labor costs that did in the U.S. steel industry, it was the 10-15X productivity advantage of basic oxygen (and additionally, electric arc) over open hearth.

I referred in a recent post (“Innovating for the Numerator”) and in a more distant one (“Surfing the Disturbance”) regarding how disruptive business models can be so, disruptive!  (think of Kodak and Polaroid in film, and what Apple's iTunes did to the music industry).  Right now you likely have some competitors being deliberately disruptive, betting that you won’t react because of paralysis, the status quo and sunk costs, and other competitors employing disruptive approaches simply as the leap-frogging path of least resistance, just like the post-war Japanese steel industry.

While the need for product-level exit strategies is imperative, and whereas an enterprise exit strategy is optional (your strategy may of course be to run your business as a going concern), the need to consider a ‘business model’ exit strategy is becoming more important as the pace of economic, social and technological change continues to accelerate.  Long term viability as a going concern means agility if it means anything, even at the fundamental level of the basic business model.

A business model is just a specific strategy for how to create and extract value, and like a product that no longer fulfills a market need, business models can also outlive their usefulness as market factors change and evolve.  The problem is often that a company's business model can become so familiar as to be almost unrecognizable as a separate aspect of strategy, as unnoticed as the air we breath.

The average lifespan for a company to be listed on the S&P 500 was under 20 years in 2010, one half of what it was 30 years ago, and a third of what it was 50 years ago.   It's not necessarily that these companies disappeared entirely, but the current prediction is that by 2027 the pace of change will be such that 75% of today's S&P 500 companies will have exited the list, some voluntarily, with a business plan to gracefully and profitably manage the transition, and others involuntarily and not so gracefully or profitably.