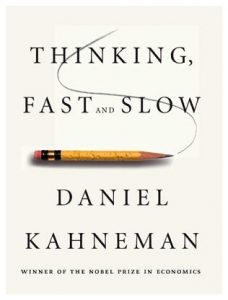 I’ve got a book recommendation for you – it came recommended to me and did not disappoint.  “Thinking, Fast and Slow”, by Nobel Prize winning economist Daniel Kahneman.  Kahneman is actually a psychologist (Professor emeritus at Princeton Univ), and his Nobel Prize winning work on decision theory will also remind you of Dan Ariely’s (Professor of psychology and behavioral economics at Duke Univ) many TED Talks, such as this one: “Predictably Irrational”, also the name of his best-selling book.

Kahneman spends the bulk of the book explaining and reinforcing with examples the two ‘systems’ that drive the way we think. System 1, arising from both the limbic and cortical portions of the brain, is fast, intuitive and emotional. It operates quickly and automatically, with little effort and no sense of voluntary control.  System 2, residing solely in the neocortex, is slower, more deliberative and more logical.  It allocates attention to effortful mental activities including complex computations, monitors System 1, and attempts to maintain some sense of control with its more limited resources.

System 2 is what we tend to think of when we think of ourselves, when we think of rational human thought, largely because System 2 is also where the subjective experience is seated, where agency and choice and concentration seem to arise.  But the truth is, most of our thinking and decision making is done automatically and involuntarily by System 1.  Even worse, System 2’s starting material comes from the intuitive and emotional decision processes of System 1.  It takes considerable mental effort, for instance, to put the brakes on and engage in more complex processing, like imagining a second, alternative option and then making a simple comparison with the System 1 original.

System 1 doesn’t do comparisons – no time for that.  System 1 takes all the readily available input (sensory data + memory) and through a wonderful associative process constructs an explanatory “story” that best fits the available data based on the WYSIATI principle (What you see is all there is).  System 1 wastes no time constructing alternative hypotheses and testing them – that shadowy thing you just detected moving behind the tree might be intending on making a meal of you in mere seconds.  Later, when you are safe and sound back in your cave, you can take the time to reconsider that perhaps you over reacted, that perhaps it was just the wind in the trees, but most importantly, you need to be alive to do such reconsidering.

WYSIATI has a few drawbacks, though, when it comes to optimal decision making.  All System 1 cares about is constructing an explanatory story – that story does not need to be internally consistent.  If the story requires ten elements to make it complete, and System 1 only has seven of those elements available at the time of WYSIATI, it will either ignore or make up the missing three elements.  It takes System 2 to analyze System 1’s decision, which for System 2 is not "all there is", but merely one hypothesis out of many to be evaluated.  But System 2 is lazy.  System 2 requires effort to engage and effort to maintain.  Unlike System 1’s unconscious, automatic multiprocessing ability, System 2 can only work on one task at a time, and is easily distracted.

Kahneman shares a poignant personal story about both the differences between the two systems and how System 1 decision making largely dominates our lives whether we are aware of it or not.  His team was about to embark on a major project.  He asked everyone’s opinion on how long it would take – the projections were in the 18 to 30 month range, with the consensus average at the two year mark.  Then he remembered that one of the team members, Simon, had some experience with similar projects, so he queried Simon directly – How long will this take?  Simon’s response?  Seven years.  With only a 60% chance of success even then.  He asked Simon why he didn’t initially say so, and Simon honestly didn’t know why he simply went with the group consensus (remember, System 2 is lazy).  In the end the project took nine years – a length of time none of them would have initially committed to.

Another example:  A consulting firm that specializes in helping inventors bring their products to market has compiled a sufficiently large database from experience that they can now effectively grade a proposal early in the cycle with a high probability of predicting eventual success.  Out of 411 proposals that initially earned a “D” or “F” grade, only four progressed further than expected, with none of the four making it to commercial success.  Even with this track record, and even with their clients paying them a fee for an objective evaluation, half of these clients continued development efforts even after being told their project was hopeless, and on average these persistent / obstinate inventors doubled their initial losses before finally giving up.  At least the data and the analysis limited the damage to 50%; typically 80% of inventors will rate their chance of success at 7 out of 10 or higher (“entrepreneurial delusions” is how Kahneman describes it).

This all points to two significant observations.  First, the absolute necessity for good data and applied analytics at the front end of the decision making process.  While System 1 is effective within its own realm and limits, it’s not that its “irrational”, it’s just that its intuition is much too unreliable to be the foundation for our critical business decisions.  Secondly, as we have seen illustrated above twice, even with good data and analytics, we need some additional discipline around our typical decision making practices.  In order to avoid our own ‘entrepreneurial delusions’, we need a meta-process, a “decision management” process, to slow us down, to deliberately engage System 2 and provide it with the data and the options it is designed to evaluate.  Because “WYS” is not “ATI”.