First let's see how APC may force an engineer inside a rectangle or box. APC tends to use known values or safe ranges — plus or minus some percentage off these known values, such as an average — as inputs that impact a specific process or target within a process. (See my prior blog post on why averages can hide problems).

Real world processes are best represented by some type of ellipse which can be modeled using a more real world distribution of input values instead of these "known" ranges.  By choosing to use "known safe ranges" as inputs you are now limiting yourself and your process to fitting inside a rectangle or box.

A picture is worth a thousand words, especially in this case the graph below makes it much easier to understand or explain what all this means. 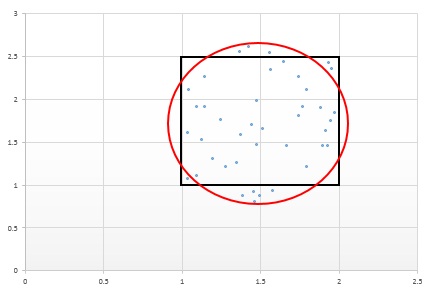 You may be wondering, who cares? Let's add some background information to our example. The process is being monitored and there are consequences when the process is stopped or restarted, or if the process fails to stop when it gets too high or low out of range. More specifically:

Now who cares? Everyone at this company should, especially with the safety issue.

Safety issue: The points in the upper right hand corner of the box, but outside the ellipse. In this case the process being monitored appears to be within the proper range, but in the real world the values are too high out of range which eventually results in an explosion.

Money issue: The points above and below the box, but inside the ellipse shows situations where the real world process is actually fine, but our monitoring process has us stop the process and restart it which results in money being lost.

Money issue: The points in the lower left hand corner of the box, but outside the ellipse results in our process being monitored appears to be within the proper range, but the end product will be out of specification and therefore result in money being lost.

Where can this lesson be applied?

I've seen advanced analytics used to enhance process controlled systems  for improved safety and overall production in refining oil, generating power, producing beer, chemicals, pharmaceuticals, food products, as well as other processes across a variety of industries. For example, in generating power and monitoring a turbine one can easily identify speed, cooling, and heating as three processes impacted by a variety of measures that can be monitored and improved this way.

What type of processes do you have in your business today that could be improved by applying advanced analytics in this way?

One other issue for the engineer or data scientist to potentially argue over is whether the X and Y variables in this example are correlated or not?  You might think these two would agree, however if they both calculate Pearson's r value (a common statistical measure to determine correlation), they may come to opposite conclusions.  Once again you may wonder why?  It goes back to being inside the box.  Many times when using APC someone only looks at the points that fall inside the box and as a result they are not using all the data available to make the proper decision.