A question was recently put to me by everyone’s favorite futurist – Thornton May: “Most people don't put innovation and infrastructure in the same sentence. They simply tend to view savings derived from optimized infrastructure as a funding source for “other” innovation investments. My thoughts?”

My thoughts initially circled in on the maxim that there are three primary ways to innovate: product, process or business model. 'Product' is the one that gets the most attention and $, while 'business model' generates the most “why didn’t I think of that” statements. 'Process' innovation tends to play third string to the other two, but still manages to get some playing time, and is the most closely tied of the three to infrastructure innovation. 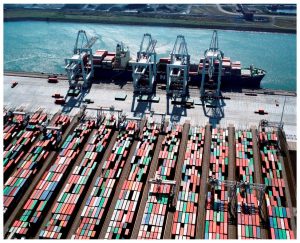 If I had to pick a recent innovation in infrastructure for the major impact it has had, I would choose containerized shipping, and all that entails, from the ships themselves to the marine terminal cranes to the railcars, the trucks and the warehouse logistics. Without containerized shipping, Walmart is nothing like the retail behemoth we see today – there is just no way we could keep the cost reasonable on all those imported unnecessary plastic objects without the improvements and cost savings provided by containerized shipping.

Sticking to this grander scale and looking out into the future, other possible infrastructure innovations might include:

For an exciting tour of the 100 most significant on-going infrastructure projects on the planet see this terrific “Infrastructure 100” presentation from KPMG, or projects like Denmark’s Oresund Bridge and Sweden’s almost too successful recycling program.

What these seem to have in common includes:

Large scale public infrastructure innovation, however, does come with its associated struggles, especially the inertia and active resistance of large, powerful entrenched special interests. Comparatively, endo-firm innovation should be a simpler process to execute; a CEO doesn’t need to conduct a poll and gain approval from both houses of Congress to initiate change.

I can immediately think of three obstacles to internal, intra/endo-firm innovation. The first is that, unlike product innovation, which enjoys at least 17 years of patent protection, innovative business processes are easy to copy and the competitive advantage can be short lived, so we tend not to allocate scarce investment resources to them. Secondly, we typically evaluate the ROI on our infrastructure investments based only on the hard numbers, the hard $$$ savings. Unless someone in sales is willing to sign in blood for increased revenue and market share, these “soft” benefits remain as footnotes in the appendix.

IT infrastructure innovation is of course the one nearest and dearest to my SAS heart, and there are a number of cutting-edge, IT-driven innovations that likely will be game changers once they come to fruition, such as vision and speech/text recognition, and tactile / remote sensing capabilities. Then there is of course the digital nervous system of Brian Arthur’s “Second Economy” , which holds much promise and possibility, especially when analytics is incorporated to serve in a decision support capacity, similar to the “big data” sensory and memory processing that goes on in the human brain just below the level of consciousness.

The trick for the individual firm looking for innovative business processes, it would seem, would be to pair return with possibility; to not just tolerate some soft money benefits in the ROI justification of major investment projects, but to mandate them, along with the associated project plan milestones that might lead beyond just current cost savings to new and innovative business processes and models; to use those pioneer projects and infrastructure investments as kickstarters for the future. Most importantly, it requires always evaluating your solution and infrastructure investments not in isolation but as a portfolio where the sum of the parts can lead to the enablement of possibilities not yet imagined.