“Faster, Higher, Stronger” is the Olympic motto. In a Keynote Lunch presentation at SAS Global Forum, Tim Patrick, Director of Enterprise Applications for the United States Olympic Committee, explained how technology, data analysis and visualization are helping fulfill that mission.

After a successful showing at the Vancouver games, Patrick and his team asked themselves what they could do to better leverage technology for the London 2012 games. Their ideas started on a white board, and nine months before the London games, Patrick pitched their plan to executives.

He told them, “We’re going to unite disparate systems and data in a single framework for analysis and visualization.”

This was no small feat, but Patrick knew it could be done.

US Committee analysts used SAS dashboards to visually track the real-time Olympic feed to determine how US athletes were performing compared to other countries.

What’s next for the US Olympic Committee?
After Patrick explained how they were able to integrate their enterprise systems with the real-time Olympic feed, he made an announcement about their future data analysis and visualization plans: they will be using SAS Visual Analytics. He said, “For us to take all of that power and to put it out in the field with our sports performance analysts where things are happening with coaches and athletes is going to be profoundly powerful.” 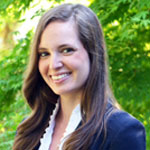 As a Senior Communications Specialist, Lane supports SAS R&D in planning, coordinating, and executing its internal communications objectives. In this role, she writes and edits organizational and R&D-related content for blogs, internal social media platforms and the corporate intranet. Prior to joining SAS, Lane worked at the Institute for Emerging Issues at NC State University in a communications and outreach capacity.