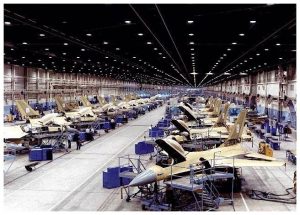 I worked at the General Dynamics (now Lockheed-Martin) F-16 jet fighter plant in Fort Worth, Texas, during the mid-1980’s, where they subsequently manufactured the F-22 and now the F-35. My tenure there spanned the era of the $400 hammer and $700 toilet seat scandals in the military procurement world. While we didn’t have any of those specific issues to deal with, management wanted to make certain that no similar skeletons hung in our closet, so we were directed to inspect and assess EVERY SINGLE VENDOR INVOICE during the prior twelve months.

We operated on a cost-plus basis with the government, where vendor and direct costs were assigned to various cost pools, such as production, R&D or maintenance, upon which a pool-specific, pre-negotiated overhead rate would be applied, and which included GD’s profit margin.  So while it was unlikely that any particular invoice would surface as a public embarrassment, the government had the right to audit any and all of the supporting documentation for the cost pools at any time, and we simply wanted to assure that we would come out squeaky clean should that occur.  We had the authority to reject obvious incorrect charges ourselves, such as reimbursed personal expenses that should have been excluded from the pool, whereas other more questionable charges were to be brought forward for management review.  I happened to come across one of those.

My memorable moment came when I unearthed an invoice for “twenty-four extra-large bunny suits, ears and tails removed”, from a local costume shop.  The department incurring this charge was the Flight Line, that row of hangers across the street and adjacent to the runway at Carswell AFB where the engines were installed in the otherwise completed aircraft and where the test pilots would run them through their paces before turning them over to the Air Force for active duty.

The question on my mind, and everyone elses back inside the main admin building was: What exactly are they doing over there on the Flight Line?

The Flight Line was not one of my normal departments, but the task fell to me to phone up the department manager and find out what was going on.  He was exceedingly polite and actually seemed excited that someone was paying attention.  “Can you come out here between 2:00 and 3:00pm this afternoon?  We’ll have two aircraft ready for their next flight tests, I’ll show you around, you’ll get to see them take-off close-up, and I’ll show you those bunny suits and what we do with them.”

Turns out the bunny suits were completely legitimate, which perhaps should have been obvious from the one clue – ears and tails removed.  During engine installation, adjustment and testing, the engine maintenance engineers have to crawl up into the engine bay.  The bunny suits were worn over their normal clothes, and with the outfit zipped up to the neck, served two purposes.  First, the soft, furry fabric would not scratch any of the maze of fuel or hydraulic piping and fittings (have you ever seen the inside of one of these engine compartments?), and it would prevent things like watches, shirt cuffs, buttons, buckles, belts, belt loops, shoelaces and the like from inadvertently snagging on something, bending or damaging it, often in a manner undetectable until years later during a high-G turn during combat.  And secondly, it prevented small objects like pens and coins from falling into the compartment and perhaps later working their way into the moving parts of the engine, causing catastrophic damage.

What this goes to show is that often your outliers can be as interesting as your “normal” data.  Often the outliers are discarded, replaced or ignored in an effort to get ever more precise in the measurement of that mean, median or next quarter’s forecast.  This of course is a commendable endeavor, but don’t let it distract you from the equally valuable information that lies on the other side of this analytical coin.  Tell me something new, tell me something I don’t know – these are the kinds of insights that can come from an analysis of the outliers (which are only "outliers" with respect to some other analytically determined norm), something SAS Visual Analytics is exceptionally well-designed to explore and address.

This is just a sampling off the top of my head of what benefits might be hidden in your outlier data;  I’m certain you can come up with a quick 3 or 4 that apply to your industry, market or circumstances.  And as for those bunny suits on the Flight Line, as legit as they were, management decided not to submit them to the government as  part of the cost pool for reimbursement – too risky and too difficult to explain if the media ever got a hold of it.  But for some small costume maker in Fort Worth, it was a most lucrative outlier indeed.