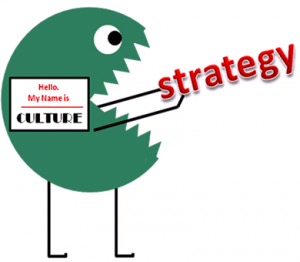 “Culture eats strategy for breakfast”.  If we’ve heard it once we’ve heard it a thousand times.  I even wrote one of my early posts on this topic (“When metrics collide”).  Consultants, analysts, academics and other thought leaders have examined and questioned its veracity, but still the consensus seems to be that the aphorism is in fact true – culture is a force to be reckoned with.

Not satisfied that this horse has been beaten thoroughly enough, I too recently took to re-examining this common maxim.  My starting point was to define my terms.  As for strategy, I like Michael Porter’s assessment that strategy is how an organization responds to competition.   Porter of course goes on to define particular strategies or classes of strategies, such as his three generic strategies or his marketing strategies, but returning to the high ground of the basic definition, he further elaborates on the competitive aspect with his “Five Forces” model – “The Five Competitive Forces that Shape Strategy”.

As for the corresponding definition of “culture”, the one I think we are most familiar with is: “How things get done around here”.  There is, however, I think some value in devising a complementary definition, one that incorporates Porter's idea of an organizational “response”, so my proposal for today's purpose is to define culture as an organization’s response to stress.

I do of course realize that this is a somewhat negative way of defining culture, as it ignores the positive contribution to culture of organizational values such as innovation, customer-centricity, authenticity, inclusion or achievement.  But to get at the heart and truth of this whole breakfast feeding frenzy I need to keep the definition narrow enough to allow for some useful comparisons.

Operating on this premise of stress, culture is how an organization internally responds to things going badly.  Revenue did not meet targets; the product was late to market; the competition beat us to market, our cost structure is out of line; our quality is suffering; we’re losing customers and market share; our web site is a disaster and our user interface isn’t much better; we’re being out sizzled and out sexied.

So what is the response?  Panic?  Anger?  Fear?  Denial? Not invented here? Blame and finger pointing?  CYA? Retrenchment into process and bureaucracy?  Freeze everything? Fire everyone?   Reorganization?  An investigative committee?  An acquisition?  Fraud/cooking the books?  Surround everyone with everything we’ve got?

There are of course more positive responses to stress.  Just this past week we’ve had two separate and unrelated events in space exploration that showcase this more positive side.  On Mars, NASA had to quickly and unexpectedly cut over from main computer A to main computer B when a problem with the Curiosity rover’s computer A memory cropped up.  Over at SpaceX, three of the four maneuvering thrusters on the Dragon resupply craft to the ISS malfunctioned, leaving it in a precarious orbit and far short of its objective of safely docking with the ISS.  That they got the thruster problem fixed after what founder and CEO Elon Musk termed a minor “glitch” shows that he and his senior staff most likely did not respond to the stress by going off on an emotional tirade.   In fact, what both the NASA and SpaceX responses had in common was that they were rehearsed responses.  Failure had been anticipated and planned for.  Failure had been simulated and an appropriate response crafted and practiced.

Now, getting to the heart of the matter – Why does culture eat/beat strategy?

My proposition is that for the real human beings that actually make up your organization, INTERNAL threats to themselves, their position and their security take precedence over the EXTERNAL threats typically addressed by strategy.  Abraham Maslow wins again.

So what’s to be done?  Remaining true to my Maslow analogy, there are two approaches that can be implemented simultaneously.  The first is to attack the issue of culture and response to stress directly, essentially addressing the safety and security levels of Maslow’s Hierarchy of Needs.  Why do we blame?  Why do we become bureaucratic?  Why do we think we can reorganize ourselves out of our dilemmas? This undoubtedly will involve focusing on the personalities and personal behaviors of executive management and the rest of the organization under stress, but it will also center on creating alternative models for response to stress and failure, often beginning with an admittance that failure, while not an option, is a possibility.  In other words – prudent risk management and risk mitigation

The other approach would be to focus higher up the hierarchy, on organizational self-esteem and purpose.  I think there is much to be said for the adage that every successful organization needs an enemy, or perhaps a worthy and imminent adversary.  Coke needs Pepsi, Ford needs GM, Ali needed Frazier (and vice versa) (although it would appear that cats need neither dogs nor anyone else).  A thriving organization requires a strong and compelling external threat on which to focus its attentions.  The same holds for non-profits: it's that externality of preventing hunger, curing cancer or saving wildlife that musters the toops for the cause.  You may not be able to quickly fix your underlying cultural issues, but you can grab and shake that organization by the shoulders and shout – “Look!  Stop the naval gazing!  There are real threats out there folks, and I suggest you get on it.  NOW!”

Support for this externally focused approach can come from a variety of inputs:

Yes, culture eats strategy because Maslow was on to something.  But I do believe that corporate culture can change, can evolve, and improve – you are not by any means stuck with culture.  It will of course take an honest assessment of some vulnerable aspects of ego and human personality to effect those changes, but there are many examples of individual humans and giant corporations that somehow manage the transition all the same.  Any difficult cultural shift of a magnitude sufficient to significantly change outcomes is going to take time, time that you don’t have in a competitive environment.  So while you are working on cultural and behavioral responses to stress, you can also be creating and enhancing your external strategic response to competition as a tactic to galvanize your organizational cohesion, attention and passion.