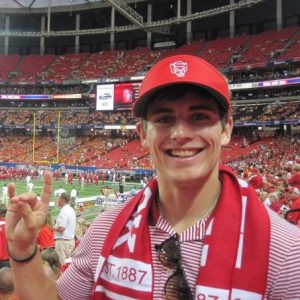 Anyone who knows me knows that I'm one of the biggest NCSU Wolfpack fans around. And, I’m a huge fan of the amazing workplace culture at SAS, too.

It's not very often I get to combine those two passions into one news story - but when I do, you better believe it's going to be a good one.

You may recognize Andy Walsh as the North Carolina State University Student Body President who pushed wheelchair-bound fellow student, Will Privette, onto the court in what has turned out to be the most talked about NCSU sporting news since the Pack won the National Championship in 1983.

Right after #20 NC State overshadowed #1 Duke last weekend, a few acts of kindness and compassion in some ways overshadowed the thrill of that win. When it was evident in those final seconds that NC State was going to defeat the previously undefeated Blue Devils, Walsh offered to push Privette to the sidelines so he could be first on the scene when the fans inevitably stormed the court.  Neither of them imagined what would happen next – from the terror of Privette being knocked out of his wheelchair (and his glasses), to the inspiring and compassionate manner in which NC State star forward CJ Leslie picked him up off of the floor and held him in his arms so that he could continue to celebrate with the team and its fans.  It was a moment that – for all three men – would surely be a bookmark in the 2013 chapter of their college memory books.

Walsh admits, “I did offer to give Will a push out onto the court, but in that moment I thought I could keep an eye on my friend and help him enjoy a rare opportunity for his college experience. Will is a great guy and I have always respected how he doesn't let his disability have any impact on what he does day-to-day. When he said he wanted to storm the court and I saw him first on the court there was no way I couldn't enjoy that moment with him. I think it is safe to say we have both enjoyed and have been overwhelmed with the buzz the 'wheelchair court storm' has caused. I am just thankful it all turned out well, that none of my peers were injured in the court storm and that Will got to enjoy the moment and is now getting all the well-deserved attention with Calvin Leslie.” 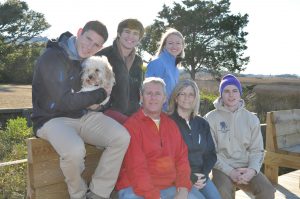 While Andy Walsh has surely made a name for himself on NC State’s campus – and more recently on local and national news – what you might not know is that Andy grew up as a “Child of SAS.”  From early days at the on-site SAS daycare to his current job at SAS, Andy has been influenced by the SAS culture.  I talked to Andy to find out what it means to grow up in the SAS culture, and how that has impacted his life and philosophies on education and leadership.

Son of Bob and Phebe Walsh – both employees of SAS for 20 years or more – Andy practically grew up on SAS campus.  His two older brothers also attended SAS on-site daycare as children, and Andy still recalls the time they were able to spend with their working mother.

“I loved when my mom would walk over from Building J and pick me up from daycare to go to lunch.  I loved getting hot dogs at the Building F cafeteria!  I also really enjoyed nap time, because nowadays, I rarely get any sleep,” laughed Andy.

Growing up as a “Child of SAS” has perks outside of just the octopus-shaped hot dogs and nap time.  Children who grow up around here are exposed to the culture at an early age.

“I think everything SAS stands for is incredible, and is a model that many more companies should follow.  My family has been very blessed to be a part of the SAS family, and this company has had a tremendous impact on me personally throughout my entire life.  I hope I can bring some of the very selfless values that are embedded in the core of the SAS foundation to whatever future opportunities may exist for me. I can honestly say that I have already tried to use many of the team-oriented, personal-focused strategies I’ve witnessed through my job at SAS into how I have structured my own cabinet within Student Government at NC State, and I have seen it pay off as my term has progressed.”

It’s no secret that SAS is known for its workplace culture.  We are often among the “Best Companies to Work For” worldwide based on our our challenging work, empowering leadership and great workplace environment.  Now, as an employee of SAS, Walsh has been able to weave some of that culture into his collegiate and professional experiences. 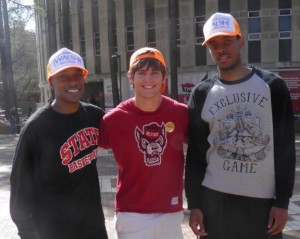 “SAS is an incredible place.  Not just the beautiful campus or uncountable amenities available to employees – it’s more than that.  One thing I have found in my time at SAS and in my role as Student Body President is that there truly is a leader inside of everyone with whom you have the pleasure to work and collaborate. Getting to work in such a positive SAS environment – where one is given the tools to be intellectually challenged and stimulated – has had an impact on how I perform my duties at NC State. Knowing that I can challenge younger students and members of my team to help discover their leadership qualities, then to cultivate and grow these qualities, while doing all of it inside of a fun, close-knit group environment has been a huge key to many of my team's (and  my own personal successes) in student government.”

From humble beginnings at  NC State, SAS has fostered an environment rooted in education and  collaboration – to the point where some would say SAS emulates a collegiate environment. As the student body leader at NC State, Walsh has witnessed this comparison first hand.

“First and foremost, I love that Dr. Goodnight and John Sall continue to bleed the red and white as two of NC State’s most generous and successful alumna. I currently serve on the Board of Trustees with John and am always humbled by his intelligence and how detail-oriented he is in our board meetings. Where I see SAS most emulating a college setting is through the technology found on both campuses. At NC State, we just had the new Hunt Library open – if you haven't visited yet it is an incredible building and you need to make time to take a tour – but when I walk into that building or even a classroom building like SAS Hall, you can see how having the best technological tools can shape and make an impact on the learning environment. At SAS, employees are learning and collaborating through technology to make better SAS products.  At a strong academic institution like NC State, students are learning and collaborating through technology to make themselves better thinkers and doers so when they graduate they are ready to make better products and impacts within our society.”

Now, back to the NC State win over Duke and the “wheelchair court stormer” Will Privette.  It’s been reported that Privette is a statistical analyst for the NC State baseball team.  When asked if he’s tried to recruit Privette to apply for a job at SAS when he graduates, Walsh said, “Privette is indeed the statistical analyst for the baseball team.  I spoke to him yesterday, and I did make him aware that MLB.com has been a customer of SAS, and he found that to be very interesting! I think he is still chasing his own dream of working for an MLB team one day.  I hope it’s the New York Yankees so he can hook me up with tickets.”

Finally, I just had to ask… Did SAS CEO (and NC State Alum) Dr. Goodnight storm the court?

Walsh laughed, “What a great question!  As Student Body President, I get invited to a pregame event that Chancellor Woodson hosts before every ACC home basketball game. With this game, the reception was packed and included members of the Board of Governors (on which Mrs. Goodnight serves). Dr. and Mrs. Goodnight arrived to the reception right before tip-off, and before I could go say hello they left for their seats so I guess the verdict is still out!  I certainly think he stayed to watch it unfold and maybe he even saw a guy sprinting across the court pushing a wheelchair! Go Pack!”