Dateline: October 4, 2012 – Facebook reaches one billion users! One billion people connected on a single platform; one-seventh of the world’s population.  If you assume 40,000 BCE as the start of modern humans, it took the planet 41,804 years to reach a population level of one billion; it took Facebook just 8 years to connect that many.

And what do we have to show for this great achievement?  Lots of cat pictures to start with, but it surely goes way, way beyond merely “Likes” and “Pokes”.  Facebook is just one of the many emerging faces of what Stanford economist Brian Arthur called “The Second Economy”, the digital nervous system that is somewhat belatedly growing in to support our older industrial economy of bone, muscle and sinew, and beyond that, is in fact taking on a life of its own. 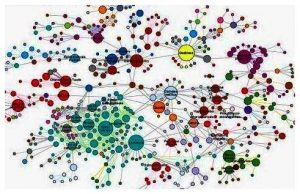 That older, industrial economy, however, isn’t going anywhere soon, although it is being transformed by all this digitization, globalization, miniaturization and connectedness into what Ray Kurtzweil might even call a ‘Singularity’ economy.

I was jolted into this awareness by a recent post by a colleague of mine.  Bob Davis is nearing completion of a book on ‘Demand-driven Inventory Optimization’ (evidently “The Hunger Games”, his first choice for a title, was already taken), and in this excerpt (“Were you expecting different results from your supply chain?”) he makes this rather counterintuitive observation (counterintuitive if you’re not paying as close attention as Bob):  A lot of the supply-chain productivity initiatives over the past couple of decades, such as ‘just-in-time (JIT)’ or ‘Kanban’, have actually accomplished not much more than to simply push the inventory problem either upstream or downstream, like squeezing on a balloon, and in the process making the cost problem as whole worse than before.

To quote from Bob’s article: “…it does not reduce costs so much as push the costs around. The costs moved back to the vendor with such things as speed of delivery and increased inventory. The result was a 5-10 percent increase in the cost of doing business with a production JIT/Kanban system. In turn, the internal supply chain of a company did not have the capability of sloughing off costs to a vendor and simply moved costs around to different links in the chain.”

Recognition of this extended upstream/downstream network is a topic I first introduced a couple of months ago in my post, “Dirt Track Date”, where I remarked that, “our increasingly integrated global economy is headed in the direction of a networked ecosystem, with business organizations comprising “nodes” in the economic network.”  The article goes on to highlight many of the extended partner, vendor, customer and other networked business relationships,  but for today’s purposes I want to instead focus on those “nodes”, and how they might relate to one another within the matrix.

I propose a four-level maturity model, beginning with a Level 0 that designates an organization that has yet to see itself as part of a network, but is instead focused solely on the value it produces as a stand-alone firm.  While these types of organizations are becoming fewer in number, old habits die hard and I have been wrong before in underestimating how internally fixated a business can become (see my earlier post on how “challenger” organizations can exploit the “establishment's” need for stability, structure and certainty by “Surfing the Disturbance”).

A Level 1 organization understands that it participates in a larger commercial and economic network, but either feels powerless to exert much influence, or has no strategic need to do so.  The one MANDATORY action it must take is to monitor the social media network traffic around its brand, business, reputation, customers and suppliers.  Although they may feel that they are not in a position of strength to have much of an impact beyond their own node, they still need to do what’s necessary to protect their turf, which will include at a minimum some means, such as social media analytics and sentiment analysis, of monitoring threats emanating from the network.

Level 2 represents a significant leap from Level 1, where the organization, someone like Walmart, is actively influencing or controlling activity across its immediately adjacent nodes – customers, partners and suppliers.  EDI and shared system/data access are commonplace.  JIT-like supply chain initiatives will be in place with suppliers, while on the other end, real-time point-of-sale retail data may be informing a vendor-managed inventory process.

Assuming the communication network backbone is satisfactory, the real problems begin with information management and data integration across disparate and incompatible systems, and the ability to drill down to the details for actionable insight.  This is where Bob Davis’ advice about employing an inventory optimization approach across the entire supply-chain spectrum comes into play to effectively control TOTAL cost and quality.  Or where a decision management or strategy management system can help you avoid the issues that plagued Boeing’s Dreamliner, where they outsourced substantial R&D components without having sufficient controls in place (I believe that despite the initial complications , this is a concept that was, at base, sound, just poorly implemented, and will resurface again).  Or, looking in the direction of the ultimate end-user, customer intelligence can be employed in the targeted care and feeding of consumers several nodes removed down the multi-tiered distribution channel.

When I think of Level 3, I think of Amazon, an organization that doesn’t simply adapt to its position in the network, but defines and dominates its eco-neighborhood – other businesses adapt to it.  It transforms from being just a node to functioning as a platform in the network. These types of organizations grab the bull by the horns and strategically apply knowledge, business analytics and communication tools to extend their influence and control widely, several nodes deep in all directions.  They become a power to be reckoned with through their mastery of big data.  Or, if they don’t like where they find themselves in the network, they apply the analytics and due diligence to find themselves somewhere else, somewhere strategically more compatible with their core competencies and mission.

‘The Second Economy’, the digital nervous system, is opening up possibilities for new business models and strategies that were previously not cost effective or even applicable in some industries. The difficult task ahead of us is not just the efficient and effective management of our internal organization and its processes, treating the firm as nothing more than a “black-box”, but the active management of our networked ecosystem relationships.  It is getting more difficult to pin down precisely where in the ecosystem the value is being created, and even that question is itself perhaps obsolete: the value is in the network.