One day in February 2011, only a couple weeks after launching the SAS enterprise social network (ESN), The Hub, I was working from home and couldn't connect to the company's internal private network. After trying some tips I found online with no success, I sent a help desk request to our internal IT operation. I also posted a question to The Hub, asking if anyone had tips on how to get my connection working.

Three hours later, the help desk request was still in queue.  (I had not marked it high priority.) But my post on The Hub was answered within 30 minutes, with detailed, easy-to-follow instructions. That by itself was a big value, but even better than the answer was the fact that two other colleagues replied that they had used the same solution with success.

This interaction demonstrates what social media is all about at its core. Through The Hub I received not only a fast solution, but also confirmation from the community on the value of the answer.

Officially, social media and Web 2.0 tools had been in use by employees at SAS since 2005. Managerial acceptance of internal employee use of these tools became more widespread, and at the same time, the company opened up to allow staff to use external social media platforms, as long as there was a business reason to do so.

It became apparent that certain internal social tools were overlapping in their focus and features, and others lacked some integration. As a result, the internal communications team decided to launch an initiative to look into providing the global SAS user base with an internal social media platform that would integrate some of the most common social media communication tools (such as message posting and comments, "like" buttons, following other users, creating and using tags, etc.) into one system.

The Hub at SAS was launched in 2011. Adoption was very good, and within a week more than 1,000 SAS employees were using it, which grew into almost 3,000 over the next year. The widespread adoption surprised the launch team, as it was twice as high as they had hoped to reach for in the first year.

Feedback on the platform has been very positive. Users appreciate the speed at which their questions are answered, and from a range of employees with whom they may never otherwise have contact.  Collaboration has increased, which has led to even more direct flow of knowledge between previously less-connected divisions of the company.

Today, The Hub is one of the key communication tools within SAS. It is used to ask questions and share links, findings, quotes, and tips. It is used during internal webcasts to ask presenters questions and discuss answers.  It connects widely dispersed employees from around the globe, it has fostered new channels of intercompany communication, and its direct knowledge flow mechanisms have led to increased collaboration and community-building.

Learn more about The Hub and how an ESN can provide value to your organization and enhance organizational communication in my new book, Connecting Organizational Silos: Taking Knowledge Flow Management to the Next Level with Social Media. 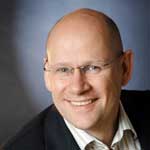