Analytics can uncover insights that compel us to view the world in new ways. An avid golfer friend of mine used analytics to improve his golf game—turning all of his pre-conceived notions about his strengths and weaknesses upside-down.

All golfers like to tell tall tales, not unlike fishermen, but Tom (not his real name) wanted to know how he was really doing. To make a long story short— before he started tracking his performance, Tom assumed that his driving was terrible, his chipping was not good, his putting was OK and his iron play was awesome.

Now Tom is one of those golfers that has more gadgets than he knows what to do with, so of course he decided to use SAS to analyze his golf game. After he captured about 500 holes of data, Tom loaded his data into SAS to run some models. Much to his dismay, he discovered how wrong a lot his assumptions about his game were. Ultimately, some things he learned were a bit counter intuitive.

Running his data through some simple analytic models showed Tom that his driving is pretty good, actually better than expected, although not consistently straight. His putting is particularly good, and his chipping was not nearly the disaster he thought. His irons, however, were another story. Not only was he not “throwing darts at the flag,” as he liked to brag, they were clearly the weakest part of his game. Even worse, his favorite club, his beloved 6 iron was highlighted as the biggest offender in his bag. Tom missed more greens and yielded more penalty strokes with his six iron than any other club!! Tom was also able to see the importance of his putting, even more important than his continually upgrading of new drivers (see Tom’s scatter plot below). 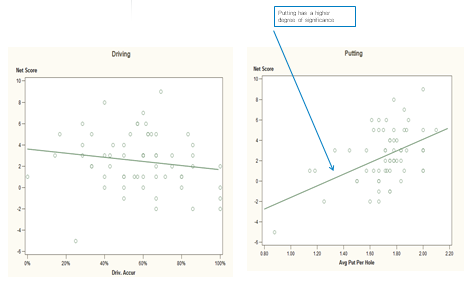 Golf results: What is more important

Now, if Tom were telling this story on the 19th hole, you would get a lot more detail (and arm waving) from him. But the long and the short of it is this: collect the data and challenge your assumptions, you’ll be glad you did. I bet Tom will now start spending more money on putter upgrades than drivers. What should you be spending more money on in your business? And where should you stop spending? Analytics can help test those assumptions too. 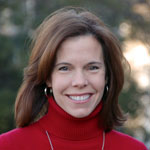