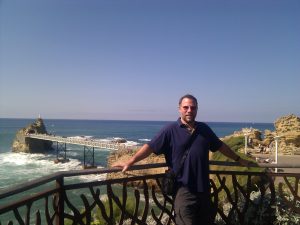 “We may not see it but math is everywhere around us,” says Paul T. Savarese, Technical Support Statistician at SAS. You don’t have to be a statistician to enjoy this interview, in which Savarese discusses target shooting, Jay Leno and Guinness beer – and ties it all back to the fascinating subject of math. Don't forget, you can also read the rest of the SAS Loves Math series or the SAS STEM webpage for more information!

What do you do at SAS?
I am a statistician in the Technical Support Division. I support a variety of advanced analytic procedures in SAS/STAT, SAS/QC, SAS/ETS, etc.  I spend the majority of my time responding to customer requests for assistance with our software which can vary from mundane to quite technical issues. This means I interface frequently (essentially daily) with colleagues in Tech Support, Development, Testing and also Education.

What’s your educational background?
I have a B.S. in Math, plus M.S. and Ph.D. degrees in Statistics all earned a number of years apart. Initially, I studied chemistry in college.  After a summer job with IBM in San Jose, CA as a chemical lab technician in magnetic disk development, I acquired an interest in computers that eventually led to an interest in statistics in graduate school (and a fortuitous exposure to SAS I might add). My first job as a professional statistician was with Bristol-Myers Pharmaceutical R&D (now Bristol-Myers/Squibb) working on clinical trials for anti-depressive and anti-anxiety medications.

What about math appeals to you?
The definitiveness of it appeals to me; that there are theorems and proofs but also the uncertainty that is common in statistical work. We may not see it but math is everywhere around us – in the cars we drive, in the places we shop, in the homes we live in, in the water we drink, in the food we buy and consume, and so on.  Some might consider math to be the language of the sciences.

Can you comment on the importance of math in education?
I am obviously biased but I think mathematics and statistics are vitally important in education. The push today to educate our students in the US regarding technical matters comes under the STEM banner, which stands for Science, Technology, Engineering and Mathematics (and Statistics!). I feel that studying STEM topics teaches you how to think and reason, and how to be analytical as it were.

What advice would you give to students studying math and statistics today?
Make sure your education is broadly based and not focused solely on STEM subjects, necessarily. Living in Madrid and not being fluent in Spanish has been a handicap. So, I would put learning a foreign language as a high priority (and it is apparently easier to do when younger.)

Do you have a funny or interesting story to share about math?
Well, this story is more about science but it’s funny.  One night, some years ago, I was watching Jay Leno on the “Tonight Show,” and an episode of his infamous “Jay-Walk All-Stars” where he asks passersby various questions. Jay asked one fellow, an adult who looked to be in his 20’s or 30’s, “How many moons does Earth have?” The shocking answer the man gave: Nine.  With a look of incredulity that I shared, Jay then asked “Well, when you look up in the sky at night, how many moons do you see?” The man replied, “One, but that moon doesn’t belong to Earth.”  Now, that guy needed some STEM training in school for sure!

Do you have a favorite math/statistics blog or journal?
At SAS, I like Rick Wicklin’s blog, The Do Loop. As a member of the American Statistical Association (ASA), I like to peruse The Amstat News and The American Statistician. I also come across various journal articles in my work with customers, including, Statistics in Medicine and Applied Statistics. I wouldn't necessarily call it a blog but in Technical Support, we have our own system of technical notes (SAS Notes) which are in the form of Usage Notes, Problem Notes and Samples.

Do you have a favorite mathematician/statistician?
It has long been one of my goals to visit the Guinness St. James’ Gate Brewery in Dublin, Ireland and hoist a Guinness Stout (one of my favorite beers) in honor of William Sealy (W.S.) Gossett. Most statisticians know the story of Gossett who worked for Arthur Guinness & Son and published under the pseudonym “Student.”  Gossett is the father of the well-known “Student’s t-test.” I went to Dublin earlier this month (October 2012) and realized my dream.   I also learned an interesting “math fact” at the Guinness Academy (where  you learn to pull your own pint of Guinness).   That is,  the good folks at Guinness teach that it takes exactly 119.5 seconds to pull the perfect pint of Guinness!

Are there any other hobbies or interests you’d like to share?
This may not be the most politically correct hobby, but during high school I became enamored with hunting for wild game. I never enjoyed success deer hunting (hardly ever even seeing a deer) into my 30’s. Upon receiving my doctorate at age 32, my mother and brother presented me with a very good rifle and scope combination that has transformed my deer hunting.  I visit a range every season and “sight in.”  This is the process of registering the actual placement of the bullet on the target with the cross-hairs in my scope. Given my exacting nature (honed by all that STEM training no doubt), I have cataloged each and every round fired through my rifle while sighting in.  My brother provides special cartridges that he hand loads – weighing every single powder charge on a sensitive scale individually for each cartridge. Naturally, he is a very successful engineer!