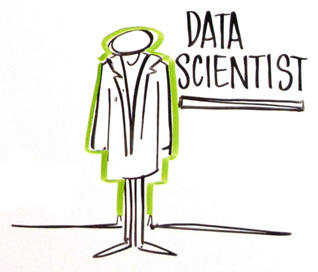 Ever since the term "big data" has popped up as a hot topic, you may have also heard about this "new" role called the data scientist. This is an important role that helps derive insight out of any sized data by applying knowledge about analytics to help solve business problems.

I would argue that equally important, but perhaps not as well known, is the role that I call an analytical DBA (database administrator). This role is a specialized DBA who can partner with data scientists to help the overall organization be more successful in running analytic based programs not projects. In this context I am not referring to computer programs, but the difference between project management and program management. A project has a start and end and produces a specific result. A program is an on-going process that changes over time and may have cycles but rather than having a defined result, it creates outcomes.

I believe IT, in general, may look at analytics as a project while it really is a strategic based program. This disconnect can have many wide-reaching effects.

Today, some organizations look at data scientists to fill the role of the analytical DBA, but these really are two distinct roles that bring together two sets of unique core competencies, which -- when done right -- benefits the entire organization.

A data scientist typically will have been trained in statistics and analytics and then learns programming, while an analytical DBA comes from more of a computer programming or computer science background. The analyical DBA should be able to help provide data scientists with not only the data they need, but in the format that is needed for analytics so the data scientist can spend the majority of his or her time analyzing data instead of preparing data for analysis.

For more information on the importance of both data scientists and analytical DBAs, see the following whitepaper: Enterprise Data Management in an ‘In-Memory’ World.

David leads the pre-sales technical team for SAS US Energy which solves business problems in the Oil & Gas and Utilities industries using advanced analytics. He earned a BS in Industry Engineering and a Computer Programming Certificate from North Carolina State University. Furthermore, he has over 28 years of business experience working with SAS across R&D, IT, Sales and Marketing in the Americas and Europe. He is an expert in working with data and producing insights through the use of analytics. David has presented at SAS Global Forum, the 2012 SAS Government Leadership Summit, IBM’s Information on Demand(IOD), EMC World, CTO Summit Conferences, is the author of the book: "Big Data Analytics with SAS", and he currently holds 14 patents for SAS in several countries: US, CA, Norway, UK, China, Mexico, and Hong Kong.