The future of business is the martial arts CEO, the jujitsu strategist.  Far too many organizations approach business with an American football mentality, complete with scripted plays, huddles and time outs, but the real world isn’t quite so convenient and accommodating.  The real business world is 7x24 with no time outs and with multiple competitors simultaneously entering the playing field from all directions.  There is no halftime to gather the team together and regroup.  Rather, the real world is more like the marital arts, the action continuous, and after the initial bow towards your opponent, there are no set pieces.  Instead, you put together a series of moves from your practiced repertoire on the fly as to best take advantage of what the immediate situation offers you.  You enter the arena with an objective and with a strategy against a particular opponent, perhaps to wear them down or to go with speed and feints so as to offset the power advantage you attribute to them through your advanced scouting and market research, but once the action starts, it looks more like dodgeball than football.

Mike Tyson probably said it best:  “Everyone has a plan 'till they get punched in the mouth.” 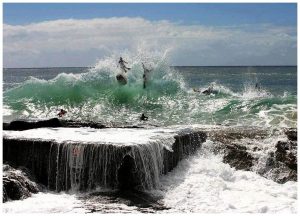 Everyone has a plan; the annual plan and business plan and capital plan and strategic plan and long-range plan.  Plans become budgets, budgets become obsolete - which is when the martial arts CEO steps in and cleans up vis-à-vis everyone else fleeing back to their drawing boards.

Eisenhower had this to say about plans: “Plans are nothing; planning is everything.”  So what’s suddenly so bad about plans, you might ask?  Certainty.  Plans incorporate an unwarranted assumption of certainty.

This is one of the key lessons from a book I’ve mentioned before: “The Challenger Spirit”, by Khurshed Dehnugara and Claire Genkai Breeze.  I have also previously mentioned Claire, most recently in this post, “Conversational Analytics”, when I reflected on working with her to transform one of my previous employer organizations into one ready to be spun off from its parent and stand on its own as a wholly owned subsidiary. Claire then went on to found her own firm, Relume (one of those wonderful words coined by Shakespeare in Othello, meaning to re-light or rekindle).  In this book she has put together over a decade’s worth of insights into what she calls “Challenger” organizations.

Challenger organizations, those seeking to disturb the status quo, are contrasted with Establishment organizations, those that have become ossified due to adherence to process, structure, stability, safety, and what she calls the “4 A’s” of arrogance, avoidance, agreement and antagonism.

This need for stability and safety in turn drives a requirement for certainty, an unachievable sense of certainty in an uncertain world, which becomes their Achilles heel.  This weakness can be exploited in two ways – first, by deliberately disturbing the status quo, and second, by learning to embrace uncertainty yourself.

There is a space between the status quo and complete chaos called Purposeful Instability.  In this middle ground of disturbance lay experimentation, creativity, contention, anxiety and transformation.  The Establishment organization avoids this instability like the plague, and should it somehow find itself there, will pull back into its comfort zone with tactics such as “not invented here”, not in accordance with standard operation procedure, that this “wasn’t in the plan”, or simply labeling the behavior as too risky.  Deliberately disturbing the market is typically a winning strategy against an Establishment who has something to lose, something to protect.  Challengers neither accept the boundaries instituted by the Establishment, nor do they try to imitate them.

In the face of such a challenge, the Establishment organization grows anxious, uncertain how to respond in a manner that doesn’t impact the status quo of current revenues, products and customers.  A great deal of internal energy is spent analyzing and debating while actually doing nothing, hoping that the challenge will wither away.  The litany of companies who have become frozen in their tracks in the face of clear and present danger is long, with perhaps one of the most famous being Kodak, its fate highlighted by this quote I heard at a conference last week: “10% of all the photos ever taken were taken last year”, with Kodak playing only a small part in a market it once dominated.

In order for this strategy of purposeful instability to be successful, the Challenger organization must itself become comfortable with uncertainty and anxiety, and importantly, they must become adaptive learners.  As they throw boulders into the pond they must learn to surf the waves they have created.  Relume has found one particular trait of successful Challenger organizations to be THE key to their success – how they treat failure.  They celebrate failure the same way they celebrate success, for they know that the experimentation and creativity that arises in the disturbance gap is going to result in at least as many failures as successes.  They are operating near the edge, well away from their comfort zone, and the comfort zone of their Establishment competitors.  Nothing will suck them back into that comfort zone faster than punishing the legitimate failures that arise through experimentation and learning.

The Challenger Spirit is entirely compatable with analytics to support better Challenger business decisions, three aspects of which are of particular interest:

1)      Big Data does not imply Big Reporting.  Disruption, experimentation and creativity are not going to be found on line 89, page 143 of the Establishment status-quo monthly reporting pack.  At a minimum Challenger thinking is going to require a business intelligence approach of data + context to support it.  But beyond that basic requirement, it’s not so much about the answers as it is about the questions and the exploration.  Experimentation, creativity, learning and transformation are going to come about through unstructured ad-hoc queries, data mining and a visual analytic, sandbox-like approach.

2)      Scenario planning.  Returning to Eisenhower’s insight, the value is in the planning, the activity of planning, not necessarily in the plans themselves.  Embracing uncertainty means learning to live with a range rather than a number, learning to see options as your friend rather than as an indication of failure for Plan A.  Surfing the waves of disturbance means not avoiding or minimizing risk, but understanding it, managing it, and accepting that risk plays a key role in destabilizing the status quo.  Challenger organizations don’t have each step of the journey precisely mapped out with variance reporting in place to punish even the smallest deviation.  Instead, between their starting point and their clear objective they have a variety of options and paths to get them there depending on internal and market circumstances, and on how their Establishment competitors react.  This is the martial arts CEO in action – not a playbook, but a set of practiced, rehearsed, simulated options that can be called upon as needed.

3)      Closed-loop Performance Management.  The Challenger organization is a learning organization. It is creative AND adaptive.  Since it knows that one, single strategy that is good for all time is not the best approach, it is constantly testing and re-evaluating its many strategies and options vis-à-vis the market, treating them as hypotheses to be validated.  It is not seeking the safety of high, solid ground, but is instead constantly on the lookout for its next opportunity to disturb the force.  It is a cycle, an OODA loop combined with monitoring, evaluation and feedback on the backend, knowing that course corrections are par for the course. 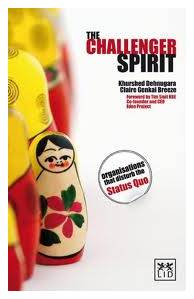 I leave you with a word of caution, however: The Challenger Spirit is not for everyone.  Notice the title – The Challenger SPIRIT”; not The Challenger Process, or The Challenger Methodology”, or The Challenger Approach.  No, it’s the Challenger SPIRIT, and knowing Claire as I do, this is no accident.  Becoming a Challenger organization starts first with transforming yourself as a leader, because it’s not some vague “organization” that does the challenging and the learning and the disturbing - it’s you and the people you lead.  Each chapter ends not with a summary but with a transition from the broad, organizational aspects of becoming a challenger to what they call the Practice Ground where you personally review the inner and outer work it will take to make this transformation, and also with showing you “What Good Looks Like” in terms of personal attitudes and behaviors.  But then again, as any martial arts master will tell you, it was always going to be this way.  And don't be surprised if I return several more times to the themes expoused in The Challenger Spirit, as there is more, much more, contained within its spirit.