SAS Global Forum is known for excitement and surprises. So far, this year has been no different.

It all started on Sunday when Teradata Chief Analytics Officer, Bill Franks, was reported missing.  His absence was especially noticeable because he was expected to promote his new book, Taming the Big Data Tidal Wave, as well as to talk about the latest high-performance analytics activities from the SAS and Teradata partnership.

Folks looked for him at the Gaylord Hotel and Resort, wondering if he wandered over to the SAS Executive Conference, but the search turned up only posters that were issued to event attendees in an effort to track him down.  The search continued at the Dolphin Hotel and Resort, and on to the demo floor, but to no avail.  Efforts to find Bill paused at the Teradata booth on Monday night where a crowd was gathering.  Perhaps he was there? 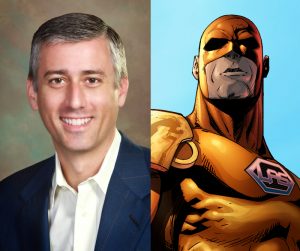 Suddenly, a commotion arose from the back of the crowd and Bill emerged - looking disheveled and weary!  As he made his way through the crowd, he ripped open his shirt to reveal that he is none other than Dr. Insight - the leader of the League of Analytic Superheroes!  Dr. Insight has been teasing us with his recruitment statements via blog and Twitter for weeks.  Apparently he had been temporarily detained by Obscuro - the arch-enemy of the League.

Having just escaped the clutches of Obscuro, Dr. Insight issued a plea to the growing crowd by the Teradata booth - stating that he needs assistance battling Obscuro, and inviting any other analytic superheroes to join him in his cause.

From the crowd emerged Rick Andrews, who works in the Office of the Actuary for the Centers for Medicare and Medicaid Services and is a twenty-year programmer-analyst. His career roles have included senior data analyst, engineering analyst, systems designer, team leader and mentor.  As he approached Dr. Insight, Rick revealed HIS alter-ego - Illumino!  Dr. Insight had his first Analytic Superhero!

Experienced in mainframe, UNIX and Windows environments, Rick's strongest technical skills are SAS programming and SQL.  He has trained hundreds of users and meets monthly to keep economists, statisticians, actuaries and health specialists on the top of their fields.  His predictive insights quickly deliver useful information, producing super-hero sized results - earning him the moniker of Illumino. 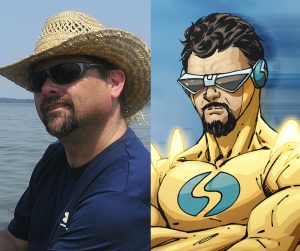 To commemorate his induction into the League of Analytic Superheroes, Rick received an illustration of his alter-ego, Illumino, created by a renowned graphic novelist, as well as an action figure created in Illumino's likeness.

Dr. Insight then adjourned the gathering, but not before issuing a plea to others who could help his cause.

Do you have analytics superpowers?   If so, you could be honored at an upcoming SAS or Teradata event, and immortalized with a graphic illustration and action figure in your superhero likeness.

Tell us your story.  The League needs you.