Bart Baesens, PhD, an Associate Professor at Katholieke Universiteit Leuven has been conducting research - along with a few of his PhD research students - to determine whether network analysis can improve traditional churn prediction models in the telecommunications industry. He presented the team's findings today at the Analytics 2011 conference in Orlando.

How accurate are existing models?

Wouter Verbeke, one of Bart's research students began the project by looking at existing local models for churn prediction. He found that many of the techniques currently in use  perform quite similarly. The performance of these models typically ranged from 70-90 percent accuracy with models that had ten to fifteen attributes.

Bart and his team then asked, "How can you improve those models?" One, you can improve your technique with complex modeling techniques or two, you can enrich your data. Specifically, they decided to enhance the existing regression models with social network data by asking questions like, who is my customer talking to? Who are his friends? Who is influencing him? 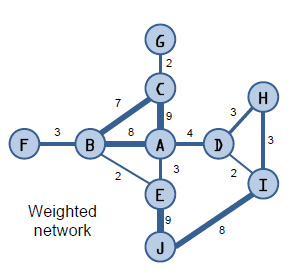 Before we go much further, I should mention that social network analysis does not typically analyze data from social network sites like Facebook and Twitter, as many people assume. Rather, it is a data mining technique that explores the patterns between people (or other entities) in a network or group. Social networks are typically illustrated through a series of nodes and edges (or ties) that show which people (or households or companies) are connected. The edges or ties can also be weighted to show the strength of the connection. (At SAS we currently have 9 telecom customers using our Customer Link Analytics product to solve this business problem.)

"If we can find a way to bring social network data into simple logistic regression models, we could have a white box model that improves results," hypothesized the team.

The data set Bart's team began working with included five months of call detail records on 2 million customers with a current churn rate of .5 percent. The social network created based on this data included 8,000,000 edges, and the size of the data set was about 300 gigabytes in size. Due to the complexity of determining relationships between so many entities, Bart says the analysis requires parallel computing and high performance analytics for the sparse matrix handling.

The team created a network graph that showed weighted relationships between customers based on the number of seconds they talked to each other per month. (Text messages were considered a constant 5 seconds each.)

Some of the questions they wanted to answer were:

When Bart's team first completed the network map and started looking at random samples of the data, they saw chains of churners popping up together right away. During the presentation, Bart displayed one time-lapsed section of the graph, and you could see side-by-side nodes turning red one after the other. 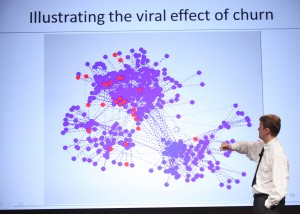 Bart cautions that these results are from a single Belgian company, but his research team is validating them now with data from a second company. If you want to learn more about this second case, or if you are a telecommunications company with data that Bart's team could use for a third study, he welcomes contact via email or Twitter.