We had the third episode of the SAS Power Series in New York last night. The event was very well attended—including a few meeting crashers who apparently had nothing to do with analytics, but fortunately they left early.  Jim Davis, the CMO of SAS, started the evening with a definition of analytics—remarkably similar to the one I often use (since I borrowed it from SAS many years ago, and have made only minor modifications).

So when it was my turn to speak, I was left with defining analytics by the range of examples I’d heard about over the previous day or so. These are all examples of what you might call, Analytics at Work. 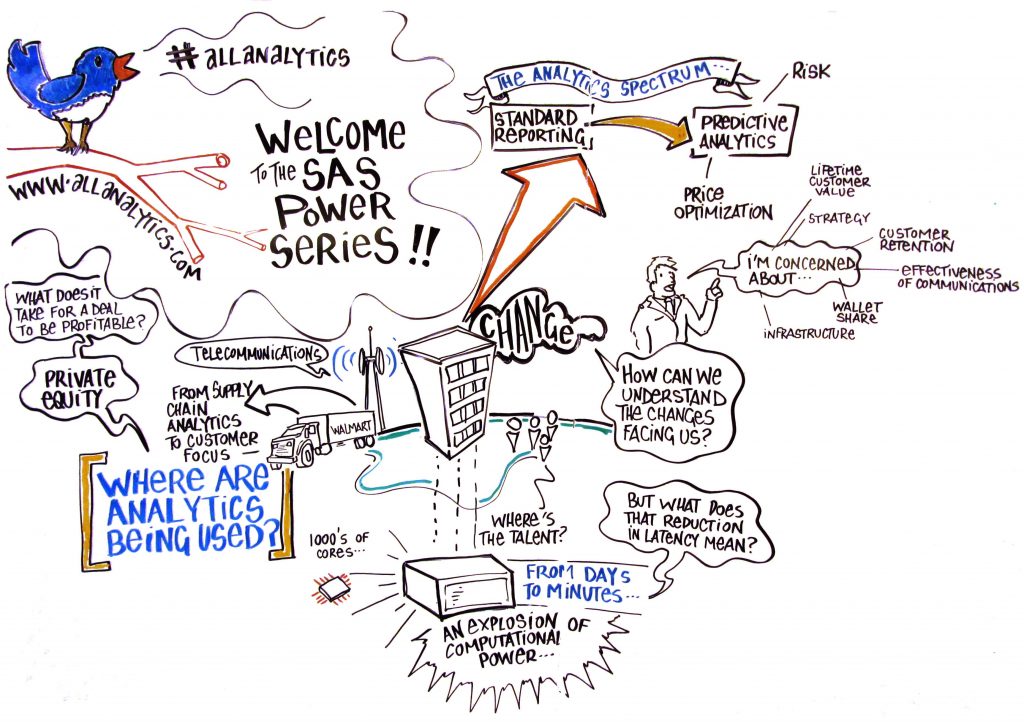 My day in analytics started early with a call to a very large retailer. They have recently established a centralized customer analytics function, and we chatted about how to generate customer insights at the scale of such a large firm. Analytics have clearly gone mainstream at this most mainstream of firms.

Then I met with a group of Belgian consultants who have a thriving practice working with telecom firms in Africa. The company, called Real Impact, creates “guided analytics” solutions to help the telecoms solve specific network or marketing problems. They’ve even recently done work in Yemen. If analytics can be pursued in that war-torn country, they can be done pretty much anywhere.

The next morning I met with a group of human resource executives. It’s clearly early days for analytics in HR, but some companies are moving out. One company at the gathering, for example, was using analytics to predict which new hires would become high performers, and which managerial attributes led to good ratings by their subordinates. I knew that Google was doing these things, but it was nice to hear that they’re not the only ones.

Later in the morning I talked with a private equity executive. He confirmed my feeling that PE firms don’t normally use analytics to model how the firms they buy can be made more successful so they can be sold.  But he plans to do it—even to the point of learning when it makes sense to install a new CEO.

I figured that the variety of analytical initiatives at the Power Series dinner couldn’t match what I’d heard about before it. But it did. Who knows what industry the crashers came from, but the legit attendees were from a wide variety of them. Not surprisingly, there were a number of banks and investment firms. But we also had publishers, ad agencies, government agencies, retailers, and hospitals.

The range of analytical applications discussed was similarly varied. Jeremy Shapiro from Morgan Stanley, who knows more about HR analytics than almost anyone, was there and told me about some cool things he’s up to in standard HR metrics. There was a lot of interest, of course, in marketing analytics—including from Tony Lofrumento, an analytics guy I’ve known for many years. The finance people were worried about data privacy and compliance; the hospital analysts focused on fundraising analytics.

In short, there is as much variety in analytical programs and initiatives as there is in business and organizational life in general. If Samuel Johnson were around today, he might say, “When a man (or woman) is tired of analytics, he is tired of life.”