The SAS Power Series Tour had its most recent stop in the heart of Silicon Valley, San Jose. This gave me another chance to test my hypothesis that firms in the Valley are not big users of analytics. My theory goes that high-tech firms are much more focused on creating great products and keeping up with technology in their products than they are on using analytics to optimize operations and customer relationships. 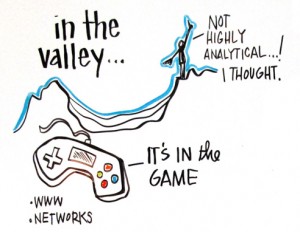 I still think my theory holds, but only if I narrow it down considerably. First, there are plenty of Bay Area firms who aren’t really in the technology business at all, and some of them are leaders in analytics. Firms like Wells Fargo, Kaiser Permanente, and CoreLogic are leaders within their industries in analytics. OK, they’re not really Silicon Valley-based, but they’re close.

Second, you have to remove software and online firms from the analysis. Companies like Google, Ebay, Yahoo, LinkIn, and Facebook are all into analytics in a big way, and have been since their inceptions. They have massive amounts of data, cultures that support analytical decision-making, and sophisticated analytical technologies. I would argue, for example, that Ebay’s analytical testing platform and virtual data marts make it one of the world leaders in analytics. And Google is right up there as well.

So that leaves high-tech manufacturing firms actually based in Silicon Valley. On this somewhat narrow base is where I rest my tenuous case. Companies like Apple are known for fantastic products, but they are not known for analytics. The focus of these companies is on creating “insanely great” products—so innovative that customers don’t even know they want them. Detailed customer analytics wouldn’t make sense under those assumptions.

But even this is changing. Technology-centric firms like JDS Uniphase and Sandisk had representatives at the session, and they said there was increasing desire to embrace analytics. Other technology companies, like Cisco, have done great work on analytics for a while—even in the domains of product design and technology services.

My guess is also that venture capital firms will also begin to inculcate an analytical orientation among the startup companies they fund. Just as one example, Alfred Lin, the former COO of Zappos, is now a VC at Sequoia Capital. He has a couple of quant degrees, and my sources at Zappos say he was critical to that company’s analytical orientation. He’ll no doubt do the same for companies in Sequoia’s portfolio.

So let’s call it a partially-supported hypothesis (at best). Established hardware firms in Silicon Valley haven’t historically embraced analytics. But they’re on their way—although online firms, banks, even healthcare firms beat them there. It seems likely that the historical innovation of the Valley will be extended into the realm of numbers.