A current media hype phrase used to describe the ever-growing volume and size of corporate information is "big data." SAS hosts an annual series of business leadership conferences that bring together industry thought leaders, innovators, world leaders, challengers and inspirational speakers to discuss the dynamics needed for a competitive future. During the most recent conference, panelists were asked, “Why big data analytics now?” 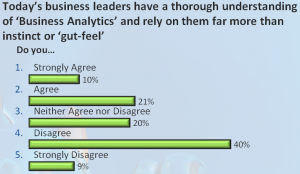 Jeffries asked if the panelists were surprised by the audience reaction. He also wanted to get the executive panelists to comment on where analytics could be applied to more successfully solve today’s business challenges.

According to Jim Goodnight, there are still areas where businesses should use gut instinct for decisions. For instance, in a hiring situation, he says you may not have enough data to apply analytics to make the decision. “When you’re running a marketing campaign, there’s an enormous amount of data to help you make a decision of who to include in the campaign. If you don’t use all of the data at hand to make those decisions, then you won’t do very well.”

Goodnight went on to give another great example of using data to its fullest potential. SAS works with Macy’s to ensure price optimization. Macy’s has more than 850 stores with more than 270 million items (SKUs) per store. According to Goodnight, each week, Macy’s wants to review their prices to decide how much to mark down each item. “Maybe you want to mark them down 20 percent, maybe 40 percent, maybe none at all,” Goodnight said. “You just can’t make 270 million markdowns in 850 stores nationwide every Monday morning based on gut feel. It just doesn’t work that way. There’s still room for human fine-tuning, but the bulk of the analysis must be done with analytics.”

Gavin Michael said that the results of the impromptu poll didn’t really surprise him, but that Accenture is beginning to see a shift from instinct and gut-based decision making to analytics. He said, “Clients are starting to turn to us for four key reasons - to drive growth, manage risk, leverage investments in IT and cut costs/improve inefficiencies.”

He added that each industry has a key pain; for instance, telecoms want to reduce churn, healthcare wants to improve care and the financial services industry wants reduced risk and better service. According to Michael, business analytics is in its infancy. “We’re just starting to fully realize the power of data.”

When the dialogue shifted to Piyush Gupta, CEO of DBS Group Holdings and DBS Bank, he reiterated that business analytics - analytic use in general - is really in its infancy. According to Gupta, financial institutions were the first to use analytics for business purposes. This was partly driven by regulation.

“The whole shift to Basel and Basel-based risk practices has required banks to take analytics onboard at the level of the customer: expected default rates, probability of default and running models to expected return,” he said. “Historically, the credit card business in banks and any large consumer-footprint businesses doing unsecured lending tend to use analytics a lot for customer acquisition, and more importantly, for portfolio management: what kinds of products do you want to sell to what kinds of customers.”

Jeffries had been challenging each panelist’s answer to get a deeper dive for the audience. He did the same here with Gupta. “You’re the CEO of the bank. Given the successes in the risk areas, why aren’t you pushing analytics throughout the bank?”

“In the beginning, when customer interactions happened in the real world we didn’t capture all of the data,” said Gupta. “Now there has been a profound shift. As more and more transactions take place online, you have the data that you need. But even after you have the data, you need a way to effectively extract meaningful data from legacy systems and silos.” According to Gupta, making the investment a priority can be a real challenge for many institutions.

Rom Hendler has used SAS for 11 years, so his take on the value of business analytics versus instinct and gut feel for making business decisions had a particular resonance. He told the audience how he and the Las Vegas Sands Corporation use business analytics to ensure rooms stay booked in all seasons, for scheduling tables for the casinos, and for pricing and marketing.

According to Hendler, the Internet’s transparency would have made pricing challenging if not for analytics. Room rates in places like Singapore (at one time Las Vegas) can fluctuate like commodities on a stock exchange. “We developed a robust mechanism for pricing, and we maintain a good relationship with our distribution channels to ensure rate parity,” he said.

The panelist’s relationships to business analytics are varied; Magnus Böcker, CEO of the Singapore Exchange is a testament to the truth of that. When Böcker was asked how much the Singapore Exchange relied on analytics, he explained that the exchange had only been around for about 20 years – a relatively new endeavor. “Today P&L (profit and loss) is a much more important measure in our industry,” said Böcker. “Until now, most in the industry have relied on gut feel and industry knowledge. Going forward, the industry will need to have analytics and the “know your clients.”

Jeffries came back to each of the panelists. He reiterated many of the tangible reasons that they’d shown that analytics should be chosen over gut feel and instincts – but, why now? Strategically, what’s happened; what was the tipping point?

Michael sat forward and said, “We’re seeing an explosion of data. The exploitation of data – internal and external data – and its growth: that’s the key to generating competitive differentiation. You know, we’re only scratching the surface on what social media can do for us as another form of business intelligence.”

According to Michael, organizations should be creating an environment where the free flow of information generates that competitive differentiation.

Gupta agreed with Michael that the volume of data is one reason that organizations are now turning to analytics. And, he also said that more data can now be processed less expensively than ever before. This is good news since, according to Gupta, companies are now forced to collect more data than ever – especially marketing data. “Today, it’s not about the brand [as it once was], it’s all about the customer relationship. So essentially, the customer manages the brand. This fundamental shift requires you to have a relationship with your customer.”

The future is here and organizations have to make use of the data that their customers are transmitting. Gupta uses the example of a 2002 movie featuring Tom Cruise titled “The Minority Report.” In the movie, there is a scene where Tom Cruise’s character is walking in an airport set in 2054, and kiosks recognize him and market products unique to his spending and shopping behavior. “We’ve reached that point in our technological sophistication,” said Gupta. “Now we need to act upon the data we’re receiving.”

Big data and big data analytics are here to stay, but according to the panelists and audience members, many organizations are still not ready to face the music. There are several reasons – even when faced with the fact that analytics brings true competitive advantage. One reason may be that many organizations don’t know where to start. For others, the problem may be making the investment in analytics a priority. You’ll have to do your own research, but don’t take too long – you don’t want to become a statistic. 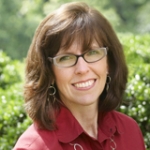