There is a lot of talk hither and yon about a “double-dip” recession. Not at all uncommon when you consider past recessions. Let’s take a look at some data from the June 2011 survey of senior financial executives from the Manufacturers Alliance/MAPI to dig into the double dip theories.

MAPI graphically shows that the business composite of indicators for growth is currently at 68 and is still well above the threshold of 50, although it has slowed down and dropped a little. You can see how closely the annualized manufacturing three-month percent change (the blue dotted line) is so closely aligned with business growth in general (the green line). Another thing that is striking in this chart is how similar the shape of other downturns and recoveries are to this one, albeit the plunge in 2007-08 is pretty steep comparatively. It is quite common for manufacturing to take a “breather” after the initial surge in recovery. 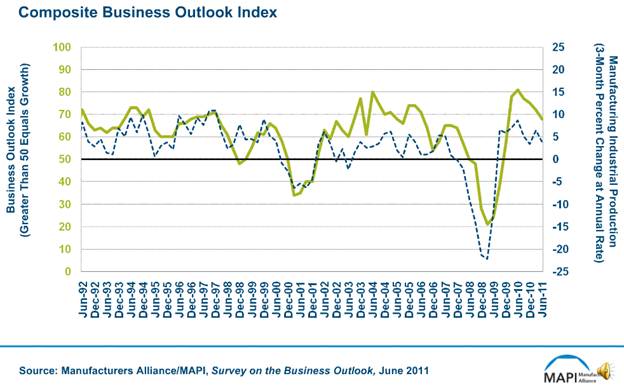 Having curtailed production steeply going into and while in the recession, manufacturers crank up production after the dip and almost always turn up the volume a little too much. And when inventories have recovered and start to look a little fat, manufacturers throttle back. When this happens, many start worrying that we are falling back into a recession. To be sure, a lot of things could happen to put us into a recession, and what happened in history is no guarantee that it will happen in the future but we have good reasons to be optimistic. Here are some of those reasons:

But three dark clouds still hang over our collective heads: the lack of employment growth, the continued hyper-weakness of the housing market and the continued relatively high price of energy. The recovery of the housing market simply has to come as new households are formed through population growth and fires, and other disasters eat up inventory. This sector will have to rebound from the anemic 600K starts a year that we have been stuck on for the past 2.5 years to a more normal 1.5M starts per year. This will have a dramatic effect on the recovery when it occurs.

Likewise, if the middle east settles down from its current high levels of tension and instability, and new energy sources like Exxon’s recent Gulf field discovery and the continuation of Brazil’s energy sector growth, oil prices will contract and that can only help the recovery as consumers then have more disposable income. Plus, two other wild cards, the looming US budget agreement and the European Union debt crisis are still unknowns that may cloud our future more or less; we just don’t know for sure what will happen as forecasting politicians is worse than forecasting earthquakes.

One of the reasons I am bullish on a continued recovery is the level of investment I see companies of all sizes making to strengthen their capabilities. Whether it is software to strengthen product quality and customer satisfaction, predictive analytics deployments to improve asset utilization or integrating robust analytical solutions into their sales and operations planning (S&OP), forward thinking organizations are putting in place the technologies and processes that will make them more competitive and profitable. But all through these recessionary years, they have also insisted on proof of real value before they invest. This critical and careful evaluation I suspect is here to stay.

Gone are the days when a software vendor can just create a PowerPoint deck with some compelling ideas and expect to win an order. And top of mind of the C-levels that I have talked with is not only proving value but proving you can make their huge investments in operational and transactional systems more valuable. With the arrival of “big data,” "big analytics" must follow; who cares about big data if you can’t analyze it and make faster, better decisions? And when heavy lifting analytics are applied to solving business problems, big savings, less risk and more profits follow.

So what do you think? Are you bullish on the global economy and manufacturing? 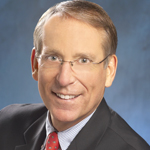