Take a quick look at the two graphs below. 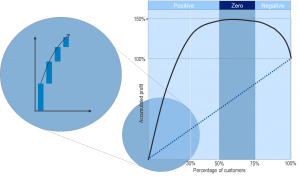 Which one appears to be the LEAST complex construction? You might initially suppose it’s the bottom one, nothing but bar graphs, and maybe just one bar graph, the tallest one on the far right, broken into its constituent segments moving towards its left. Whereas the top graph is clearly a non-linear curve spanning a range of categories across the two-dimensional coordinate axis.

However, as you’ve probably guessed by now, the question was a set up, and the first graph is actually a piece of cake, whereas the second one requires the application of some significant descriptive analytics to reveal its value.

The upper graph is the famous “Profit Cliff” (or as some call it, the “Whale Chart”), which plots the cumulative profitability of each customer in descending order by customer. In other words, your most profitable customer is in the bottom left corner, with each successive customer’s profit added next, working your way up the ever decreasing slope, coming eventually to the bulk of your customers across the relatively flat, upper portion of the curve, those break-even customers who don’t contribute much to your bottom-line but who do at least absorb some overhead, and ending with the ever steeply declining final leg of the graph that corresponds to your money losing customers, with one, in the bottom right, earning the dubious distinction of “least profitable customer”. Given a spreadsheet and the raw data for, say, a thousand customers, an eighth-grade math class could easily put this together in one 60-minute period.

The business intelligence provided by the segmentation of the Profit Cliff is invaluable – it is typically the first report demanded from an ABM (activity-based management) implementation. Just knowing who your most and least profitable customers are is incredibly important and empowering. But the insight doesn’t need to stop there. Now that you know WHO they are, what are you going to do about it? That’s where the intelligence uncovered by the business analytics applied in the second graph comes into play.

Let’s assume that the “customer” represented on the far left by the Actual Current Value bar is one of your customers (or customer segments) from that flat, middle part of no-man’s land at the crest of the Profit Cliff, one of your break-even customers, contributing somewhat to gross margin, but not someone you’d want to grant most favored nation status to. The right-hand vertical bar represents the potential value that COULD come from this customer, perhaps as determined by the performance of your best customers from the lower left-hand corner of the Profit Cliff. Each segment in between represents an action that you and your customer could jointly undertake to increase that customer’s value to the business. An example would be most helpful at this point.

Let’s give our customer a name: meet George Jetson (and a bit later, Jane his wife, daughter Judy, and his boy Elroy). And let’s imagine our business establishment to be something like Sears, a multi-line department store. George is a regular, but only in the men’s clothing department. How can we increase his value as a customer? Retailers have several traditional marketing approaches, from larger packaging, to two-for-one sales, to enticing him to try out other departments, to adding services, to follow-up on-line and catalog sales.

Now, here’s the thing. Jane’s, Judy’s and Elroy’s value contribution graph looks nearly identical to George’s when displayed this way. But we know there must be significant buying behavior differences among them. Continuing with our story, Jane is typically in there only for garden supplies, Judy for housewares for her apartment, and Elroy for the electronics. Conceptually you could apply the same high-level marketing optimization approach to each of them that you did to George - cross-sell, up-sell, add services, explore other channels, larger basket size, etc .., but in practice, knowing those key behavioral differences between each customer is crucial to turning the promise of market segmentation/ targeting into a reality.

This is precisely where the aforementioned descriptive business analytics comes into play. You probably already have all the data you need, all the various customer attributes, such as age, gender, income, address and purchase history, to make those all-important distinctions. However, this is not the relatively trivial calculation involved in computing the Profit Cliff. What you may not have are the tools to handle the “big data” and sort through the myriad of customer attributes buried in your data warehouse. But in the same way that the Profit Cliff was trivial to the eighth-graders, Customer Profitability Optimization is trivial if you have the right analytical tools.

The payoff is worth it on several levels. Retaining and growing existing customers is almost universally more cost effective than acquiring new ones. In mature markets the completion for new customers becomes a zero-sum game, so leveraging your customer attribute data gives you a significant advantage over the competition who is otherwise randomly and blindly throwing marketing dollars into the wind in the desperate attempt to steal yours. Perhaps the biggest insight, however, will come not from shoehorning your customers into YOUR marketing programs, but instead by customizing your business model AROUND your customers and their preferences. Knowing your customers as well as analytics allows could put you in the leading position of defining your business relationship with your customers in a way that your competitors can never match.