Roughly a year ago, Bruce Friend, Director of SAS Curriculum Pathways, participated on a technology advisory team at a school in Raleigh, North Carolina: a place he described as a "technology-rich environment" that was not being maximized by teachers. During a lunchtime forum, he remembered one student pulling out his smartphone and asking a group of teachers to identify it.

It was a moment in which Bruce realized that schools cannot deliver the same instruction taught five, 10, 15 or 50 years ago. He shared the story in a keynote address at the Summer Technology Institute for Educators, at North Carolina Central University in Durham, North Carolina. "Technology is not here to replace you," Bruce told the audience, "but teachers who use technology will replace those who don't."

Continuing the keynote address, he then clicked to a slide with a picture of a glass of milk. "Which has undergone more innovation in last 50 to 100 years? School or milk?"

“Something as simple as milk has undergone tremendous innovation in the last 100 years.”

88 percent of dropouts have passing grades

Bruce described the statistics regarding the dropout rate -- what he called "a silent epidemic" -- and how technology can address the issue. Contrary to popular belief, students who drop out often aren't the troublemakers. In fact:

"[The fact that] 88 percent had passing grades is a staggering figure," Bruce said. "These were not kids in the back of the class who did nothing and created havoc in the classroom. These kids were on track to graduate, but they said 'I’m out of here.'"

The No. 1 reason kids dropped out was boredom, he added.

He reported that out of every 100 ninth graders, 68 will graduate from high school. Of the 100 who began and the 68 who graduated, only 39 students will enter college while 26 will still be enrolled as college sophomores. Only 15 will go on to graduate from college.

'Teachers are hungry for this'

“Make no mistake. Using technology is not optional,” Bruce said. “We can use technology as a way for you to be connected to your students like never before.”

However technology is often unutilized, underutilized or teachers don’t have the proper training on how to use it, he said. Bruce explained a big part of training future teachers and their professional development must include training teachers on how to use technology in the classroom.

“I think teachers are hungry for this," he said. "They want to learn how to use it, and it’s not just learning how to use the device. The device is just a tool.

“We haven’t invested in our teachers in this area. We’re not doing enough to prepare our teachers to teach our students,” he said.

Bruce concluded his talk by playing a video with several interviews with students about their use of technology. “Listen to what the students have to say,” Bruce said.

A demo and a fireside chat

Following his keynote address, Bruce gave teachers a demo of SAS Curriculum Pathways, a free, online resource that will help them begin or expand their use of technology in the classroom.

“We want you to use Curriculum Pathways," he said. "We feel strongly that it is an example of the type of engaging content that your students like. It should be part of a menu of digital learning materials that you can use with your students. The price can’t be beat, and the quality is quite high.”

Bruce, a former educator, was in his element showing off lessons on the Great Depression. In a lesson on “FDR and the New Deal,” students can watch a brief overview of the Great Depression and even listen in on an actual audio recording of one of FDR’s fireside chats.

“I’m a former social studies teacher so I dig this stuff,” Bruce said.

Echoing the theme of his keynote address, Bruce emphasized that SAS Curriculum Pathways isn’t intended to replace teachers. Instead, it’s meant to supplement what they’re teaching in the classroom.

“We’re not a replacement for you, the teacher. Without you, the teacher, this product can’t do anything. You as the teacher have to decide which one of these activities you assign in class, at home or remotely. It does take you to decide what you want your students to interact with.”

Bruce concluded the demo by showing teachers how to register for an account. “Most importantly, what I want to make sure you do is subscribe,” he said.

“There is a homework assignment after this conference. That is to go and set up your account.” 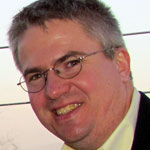 Chad is a member of the Internal Communications team at SAS. He supports the Research and Development division and other technology groups at SAS.