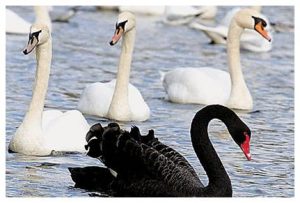 was under the impression that Black Swans were supposed to be rare. Rare enough to be effectively non-computable by standard methods. Nassim Taleb’s formulation of the Black Swan Theory is comprised of the three traits of: outlier (rarity), extreme impact, and retrospective predictability (i.e. 20/20 hindsight).

I write this shortly after what might be the largest and deadliest tornado ever recorded has just devastated a large portion of Joplin, Missouri (see this “before and after” satellite photograph for a dramatic presentation of the damage). But I could surely have had my pick of many, many other black-swan-like-events over the past decade to choose from: the March 11, 2011 record earthquake and tsunami that struck Japan, the related but separate ongoing nuclear disaster at the Fukushima Daiichi power plant, iTunes, Katrina, Lehman Brothers and the bursting of the housing bubble that brought on the largest global economic collapse since the Great Depression, the earlier bursting of the internet bubble, the September 11 attacks on the World Trade Center, the first space tourist, the ongoing uprisings in Tunisia, Egypt, Libya, not one but two volcanic eruptions in Iceland within the span of a year, North Korea’s nuclear tests, major wars in Iraq and Afghanistan, the Haitian earthquake, the December 26 tsunami that hit Indonesia, the Gulf of Mexico oil spill, Lady Gaga, …

I’ll stop there, the point hopefully being made – black swans are practically everywhere you look. What’s a bird watcher to do?

One possible response to all of these black swans is to stop focusing on their rarity and start focusing on their likelihood, or in some cases, their inevitability. In some circles this approach is called War Games, in the commercial world it’s better known as scenario planning. As a prime example, and in spite of the media attention foisted upon the climate deniers out there, both the Pentagon and the CIA, people who are paid to pay attention to such things 7 x 24, are developing scenarios that include the impact of climate change on political stability, access to resources, economic and demographic trends, and of course, military deployment. You can best believe that after being caught somewhat unprepared after the massive 1991 eruption of Mount Pinatubo that caused the premature closure of Clark Air Force Base in the Philippines, the Pentagon has continuity/contingency plans in place for every facility under their control, and probably some that aren’t.

I have already previously written about having a Plan V in place, the “V” standing possibly for volatility, or at the time, volcano, so I won’t repeat that again here other than to reinforce the importance of scenario planning, of “what-if” modeling, and of having options sitting on the shelf, ready-to-go, complete with pre-identified triggers so that you don’t waste time negotiating when you should be implementing. No, this time around I want to focus on Taleb’s second point – extreme impact.

While they may not be quite as rare as advertised, Black Swans are still a compelling concept because of their impact – they can quite literally change the world. The Fukushima incident is having an impact quite different than that of Chernobyl; because of the potential for widespread, if not nationwide, radioactive contamination, at least three countries so far (Japan, Germany, Switzerland) have indicated plans to go completely nuclear free. Collateralized Debt Obligations will never be packaged and sold again with such little scrutiny by the banks and investors. And September 11th did indeed change the world.

Identifying the likely nesting sites for Black Swans is becoming standard practice in business and scenario planning. Estimating the magnitude of the impact, however, is a somewhat more difficult task, and one that requires a quantification of the risks if it is to be beneficial to the subsequent decision making process. Not just the primary event, but second and third order impacts need to be identified and quantified. Oil on the beaches is just the obvious crisis that attracts the cameras and the media; an order of magnitude more expensive to deal with may be the medical problems of local residents who have lost their jobs and thus their health care coverage due to decimation of the shrimping industry.

And as for Taleb’s third component, the retrospective predictability/hindsight? I propose that this is just a stage we are going through, as we progress from a state of having little knowledge and data to one of more knowledge and more data to, possibly quite soon, real understanding and tons of data, or as it is being called: Big Analytics with Big Data. What is currently only obvious in hindsight is likely to soon become, if not obvious, at least manageable in foresight. The organization of the near future will be combining these three elements of scenario planning, risk, and analytical forecasting, into a capability that perhaps will turn the concept of the Black Swan into that of the Gray Swan – a predicted event with known parameters for evolving into something with more significant, and quantified, outcomes.