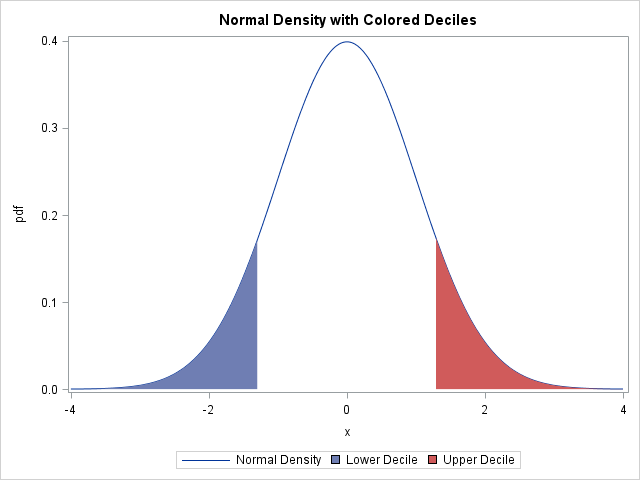 An easy way to do this in SAS is to use the BAND statement in PROC SGPLOT. The same technique enables you to shade the area under a curve between two values, such as the central 80% of a distribution or the domain of integration for an integral.

For a parametric distribution such as the standard normal distribution, you can use a DATA step to evaluate the probability density function (PDF) at evenly spaced X values. The plot of the PDF versus X is the density curve. To use the BAND statement, you need to compute two other variables. The left tail consists of the set of X and PDF values for which X is less than some cutoff. For example, the lower decile cutoff is -1.28155, which is the value xlow for which Φ(xlow) = 0.1, where Φ is the standard normal cumulative distribution function (CDF). The following DATA step uses the QUANTILE function to compute the quantile (inverse CDF) values. (To remind yourself what these probability functions do, see the article "Four essential functions for statistical programmers.")

The density curve with shaded tails was shown previously. The LOWER= option in the BAND statement sets the lower part of the colored bands to 0.

One subtlety is worth mentioning. In the DATA step, a DO loop is used to evaluate the density at points separated by 0.01. That means that the shaded regions have some inaccuracy. For example, the left tail in the image appears at x = -1.28, rather than at the exact value x = -1.28155. If more accuracy is required, you can evaluate the PDF at the exact quantile value and then sort the data set prior to graphing.

The output from the procedure (not shown) shows that the 10th percentile of the systolic values is 112, and the 90th percentile is 168. The output data set (called KerDensity) contains six variables. The _VALUE_ variable represents the X locations for the density curve and the _DENSITY_ variable represents the Y locations. You can use the empirical estimate of quantiles to set the cutoff value and highlight the upper and lower tails as follows: 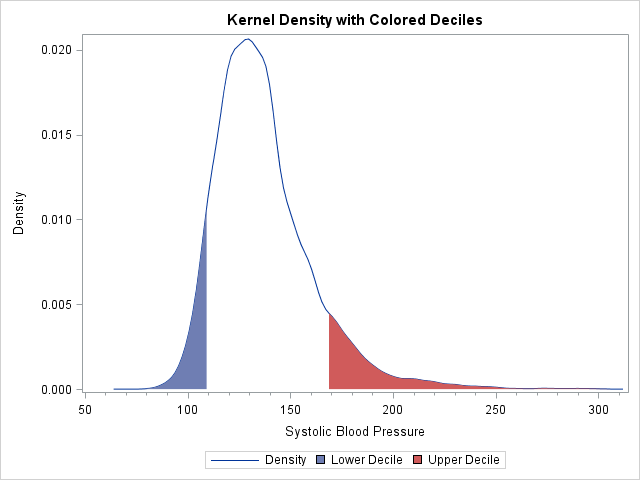 Notice that except for the names of the variables, the PROC SGPLOT statements are the same for the parametric and nonparametric densities.