Growing up in Eastern NC meant attending a diverse elementary school until 6th grade when we moved across town.  I remember asking my mom where all the black people were.  I think there were a total of 3 black kids in my 6th grade class.  Little did I know, in the next town over, the story would have been quite the opposite.   In 1997 segregation, be it voluntary, was alive and well.  However, both elementary schools combined to create 1 high school.  Insert running.  I joined the cross-country team as a freshman and, aside from a few injuries and a pause to have babies, I haven’t stopped.  Running is my meditation, comfort, the thing I do when I’m happy, angry, to relieve stress, or need to work things out.

By chance and invitation, in high school, I was asked to run for a local triathlon relay team.  I loved watching the IRONMAN Championship with my dad growing up.  One day, I’d do just that – complete an Ironman and now I’ve finished two after marriage and two kids.

Both running and triathlon have been life changers for me and passing these sports along brings me so much joy, but I can’t help that same 6th grade question pops up in my mind at the start line – where’s the diversity?  The Kenyans are known to be the fastest humans on earth, yet, in 2021, we are still waiting for our first black female pro triathlete (Go Sika Henry!) and, it was only 7 years ago that Max Fennell picked up his pro card.

Diversity is something I’m proud of in my neighborhood, my sons' school, and at SAS.  A couple weeks ago, we were able to honor Black History Month here on SAS Life by reading about BIG, our Black Initiatives Network.  Over the next 3 days, I’d like to continue that celebration by sharing the stories of 3 of our SAS athletes who are making their own history in triathlon, cycling, and running. 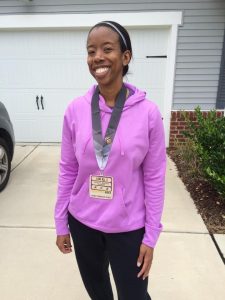 April is an Analytical Consultant for SAS, a distance runner, and most recently a triathlete.  She’s currently training for her first 70.3 – IRONMAN 70.3 NC.  These days she’s loving triathlon because it’s fun to train for all 3 disciplines – swim, bike, run – rather than just 1.

Tell us a little about how you got started in running and triathlon.

“I grew up in New Jersey.  If you’ve ever seen Jersey Shore, that seaside was like 15 minutes from my house.  It wasn’t a very diverse area whatsoever.  I was the only black student in my grade until 8th grade (when the new middle school opened and there were other students who looked like me).  I did cross country from 8th grade on up and fell in love with distance running.  I was not the best by any means, but it was something to do, stay active, and I really enjoyed it.  There were hardly any other schools where black kids were running.  Some schools were more diverse than others, but as far as racing was concerned, being a minority was normal to me.  In my younger years, I never felt out of place.  It was what I knew.”

April took off about 15 years after high school, occasionally dabbling here and there, but in effort to do something for her health, she picked up running again. 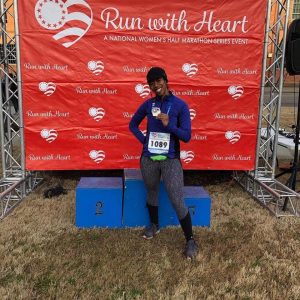 “A lady at our church said, “Hey, have you ever heard of this group called Black Girls Run (BGR)?  You should look into it.”  It just so happened that there was a group that met 10 minutes from me.  I’m not a very social person, so nervously, I went out and stood on the side.  They asked if anyone was new and I raised my hand. I have met some of the most incredible women through this organization.”

Black Girls Run warmly welcomed April into the group.  BGR promotes running for health in women of color and it was with this group April became more aware of the lack of diversity in running.  April saw more diversity in 5Ks, but as she increased the mileage, diversity declined.  City of Oaks was April’s first half marathon in 2014.

“There’s a really good book called Why Do All the Black Kids Sit Together in the Cafeteria?  I felt like that at some of these races I signed up for – like City of Oaks. All the black people congregated together at the start line, whether you knew each other or not.  I registered with BGR and with two of my white friends from Durham.  It was like I had friends here and friends here.  For most of the races I’ve done, there hasn’t been  a lot of diversity at the start line, but I think it’s starting to get a little better.  It depends on where the race is.  Despite the lack of diversity, I’ve never felt any sort of negativity for me running, and in fact, I feel it’s quite the opposite.  I don’t think that the racing environment is not inviting; I think that we are sometimes afraid to put ourselves out there and go.  As far as the US is concerned, I think health and exercise has not been preached to the black community which is why I think the statistics (obesity, blood pressure, diabetes, etc.) for our community are much higher for us than our white counterparts.”

That same year, April’s friend Kevin from Charlotte came down to complete in FSSeries’s REX Wellness - Knightdale Sprint Triathlon.  Inspired by the fun of the event, April wanted to try it – but, despite growing up so close to the ocean, she didn’t know how to swim.

“When you talk about triathlons, unless you’re a competitive swimmer, like collegiate athlete, swimming is always going to be a thing – the part where triathletes just have to get through it.  Historically, though, a lot of black people don’t know how to swim.”

“We grew up going to the Jersey Shore, but we’d play knee deep.  My parents didn’t know how to swim, so we didn’t either.  I went to friends’ houses and played and I knew how to be safe around the water, but not swim.  To this day, I won’t go completely in the ocean because I’m not confident enough.  I think it’s a product of your environment.  In the past, we (the black community) haven’t had access to pools.  As time has gone on, there’s more of a push making sure kids know how to swim and now there are more resources available.  There’s more swimwear and hair care to help us.  Hair care is important to black women and it puts a huge burden on why black women don’t even want to get out to swim.

“It’s because of the statistics* that my daughter and I did the mom and tot class and now she’s swimming without me being in the pool.  That’s good because she needs to know how to survive if something happens.  I’m seeing more black children in swim lessons and, you know, we as parents want to provide our children something better than what we had.  Starting swimming at an earlier age is good.

*According to the CDC, "African American children ages 5-19 drown in swimming pools at rates 5.5 times higher than those of whites."   Unintentional Drowning: Get the Facts

“I did swim lessons at Buffalo Road Aquatics Center and it was an adult swim instruction class.  That class was made up of 5 out of 6 black people.  They were a little older than me and it was interesting to me to talk with them and hearing their story.  They weren’t allowed to go in the pool.  Like, we know this, but at the same time that’s interesting.  There was a fear of even putting their faces in the water.  That’s a real fear and interesting too.  Fear of getting in the water and trying something new.  Swimming is a survival skill.” 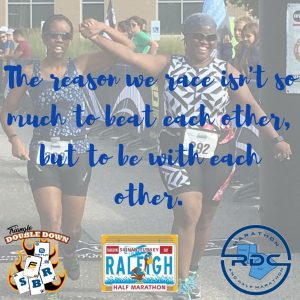 April enjoys both running and triathlon as a way to take care of her health and spend time with friends.  Speaking of friends, some of her favorite moments of training and races have been with friends.  She and a friend participated in a Rex Wellness Sprint and they agreed to stay together, but, April got slightly ahead in the bike and began her run earlier than her friend.  When April saw her friend coming in on the bike, the friend was not happy, so April turned around and went back to transition so she could finish the run with her friend.  They spent the run in a heated discussion about staying together, but when they crossed the finish line, they held hands over the finish.  FSSeries posted this photo on social media captioning it with "The reason we race isn't so much to beat each other, but to be with each other."  To this day, it makes both women chuckle at the irony.

Final question:  What advice would you give to friend who wanted to start triathlon training? 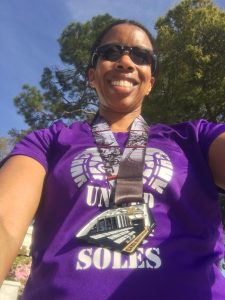 “Different strokes for different folks.  Do you know how to swim?  You have to start there and with a sprint distance race.  Find someone who has raced triathlon before that can give you help and advice and find someone to train with because it makes it fun.”

I couldn’t agree more!  Want to tri?  You must learn how to swim and then start small.  What makes triathlon fun?  Training with a group of friends!  Carla Fisher, our next athlete, shares this sentiment 100%.  Join us tomorrow for our next installment of Black History Month:  SAS Athletes Making History In Their Sport – Carla Fisher, Cyclist.

Amanda received her B.A. in Exercise and Sport Science from the University of North Carolina at Chapel Hill. At SAS, she has shares her passion of wellness with SAS employees as a Senior Recreation and Fitness Program Coordinator. When she’s not teaching others how to squat, chaturanga, and run or coaching expecting moms and Ironmen-to-be, you’ll find her exploring the outdoors with her husband, two sons, and schnoodle, cooking, propagating succulents, and training for endurance events. She’s a 2x IRONMAN finisher and multi-marathoner who loves to be on the trails or on her yoga mat! Amanda is registered through Yoga Alliance as an Experienced 200 hour Yoga Teacher (E-RYT200), certified in personal training and group exercise instruction through the Aerobics and Fitness Association of America (AFAA), an IRONMAN Certified Coach and has training in prenatal yoga, Cosmic Kid's Yoga, and as a postpartum doula.